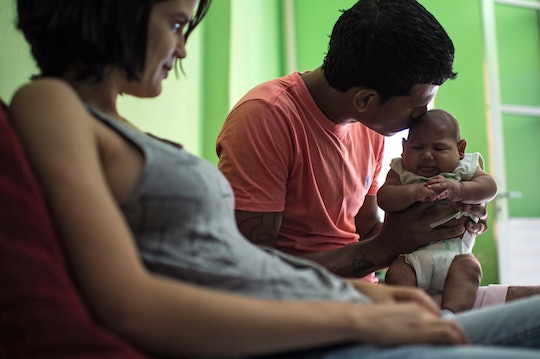 The Zika virus continues to progress and spread, leaving women who are or might become pregnant vulnerable to exposing their unborn babies to Zika, which has been connected to a serious birth defect called microcephaly, where children are born with tiny heads and severe disabilities. So what if you're a woman who just found out she's pregnant and you start to experience Zika virus symptoms? Zika symptoms during the first trimester of pregnancy are certainly a scary sign. Here's what the Centers for Disease Control says is the best way to react.

First, consider how you might have contracted Zika. Have you traveled to an area like Latin America or the Caribbean that the CDC has identified as potentially dangerous for Zika? Has your partner? There are two ways to contract Zika, that health care officials are aware of currently, according to the CDC, through a mosquito bite or from a sex partner infected with Zika.

Once you've assessed the likelihood that you might have been exposed to Zika, take stock of your symptoms. Zika symptoms like fever, rash, and joint soreness can be easily confused with other illnesses, including the closely related dengue. The distinguishing symptom of the Zika virus can often be red eyes or "conjunctivitis," but that's not always the case.

There are advances being made to speed up Zika testing. A doctor's visit can help determine the risk to you and your baby following symptoms and set you up with a urine test for Zika and an ultrasound to check the baby's development.

But there is still so much that's unknown about the effects of Zika during the first trimester of pregnancy or even if a pregnant women is exposed. Also unknown, according to the CDC, is how likely a woman's fetus is to be affected after Zika exposure or when during pregnancy her fetus might be most vulnerable. All of this is still being researched and studied.

What we do know is that the threat of Zika is growing for women in the United States. Just this week, a mother who tested positive for the Zika virus gave birth to the first baby to be born with Zika-related microcephaly in the United States at the Hackensack University Medical Center in New Jersey. The woman contracted Zika in Honduras and traveled to the United States. Doctors have given the baby a prognosis of "very poor."

None of this can be solved though without funding for Zika research and prevention, a fight that has been ongoing between Congress and the White House since February 2016.

For now, women who are pregnant or might become pregnant, the best they can do is stay indoors and wear insect repellent to try and prevent contracting Zika in the first place. That doesn't provide much comfort for concerned pregnant women, but until researchers can make important advances, that's the best advice they can give.