Jam Kotenko is a freelance contributor for Romper who occasionally writes personal essays about her experiences relating to marriage, motherhood, and everything in between. Before becoming a full-time stay-at-home mom, she used to write about cool tech and social media, often tapped to test and review new mobile apps. She's also been interviewed and asked multiple times to write about her OKCupid success story and is considered an online dating guru by people in her circles. Her bylines have appeared in Digital Trends, The Daily Dot, and GottaBeMobile. She is a mom to a 4 year old named Jasper, a 1 year old named Jones, and 4 year old Chance, a rambunctious Jack Russell Terrier-Chihuahua mix. When she's not keeping her babies entertained, she can be found binge-watching TV shows on Netflix or Hulu, listening to The Bachelor or Drag Race-related podcasts, raiding the kitchen for snacks, or trying her damnedest to nap. She hasn't had a decent nap since getting pregnant in 2015. 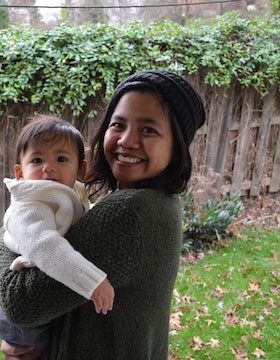 Parenting Anxiety In The Age Of COVID-19

I Drank Dark Beer For A Week To Boost My Milk Supply, & Here's What Happened

A Love Letter To My Postpartum Body

I Want My Kid To Experience The Wonder Of Santa, But I Don't Want To Lie To Him

A Mom At Our Baby-Mommy Class Turned Everyone Against Us

The $10 Dress That Every New Mom Needs

I Want Another Baby, But It’s So Hard To Schedule Time To Make One

The Book That Got Me Through My Mom Funk

Dear People Who Insist I Cut My Son’s Hair

I Sacrificed My Health To Keep Nursing

The Pants That Saved Me Postpartum

These $6 Lipsticks Are Giving Me Life

I'm Supplementing So I Can Have A Life Outside Of Motherhood

We Found The Perfect Postpartum Swimsuit

I Just Got My First Postpartum Period, But I'm Not Ready To Wean

I'm Obsessed With This Blanket-Style Cardigan

My Son's Heart Surgery Showed Me My Own Strength

My Parents Shamed Me For Scheduling My C-Section

My Gestational Diabetes Was Actually A Blessing