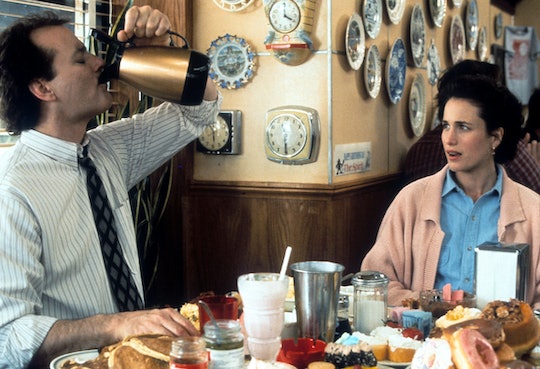 In the Bill Murray classic, a reporter finds himself trapped in a single day that's a never-ending loop. We know the feeling.

Of American holidays, Groundhog Day — the day we agree that a huge rodent dictates the weather — is probably the weirdest. If the creature emerges from its hibernation and sees its shadow, we will have six more weeks of winter. If it doesn’t see its shadow, spring is on the way. But apparently last year the groundhog saw something that made it say, "Six more weeks of winter? Nah. Let's make 2020 last 600 years." Indeed, 2020 was like the movie Groundhog Day, but starring you and your now feral children.

For those of you who haven't seen the 1993 flick (and seriously, how? It's not like we haven't had the time to watch all the movies this year) Groundhog Day, starring Bill Murray and Andie MacDowell, tells the story of a cynical TV weatherman on assignment in Punxsutawney, Pennsylvania. Through reasons that are never explained, he gets stuck on an endless loop of reliving Feb. 2 over and over and over. Every day, exactly the same, except for whatever he chooses to do in it. Ultimately, though, whatever he does doesn't matter, because the next morning his alarm clock will go off, the same song playing as the radio DJs announce that it's Feb. 2. To the rest of the world, the previous iteration of the day is wiped clean and the same day is reset.

It's a monotonous existence. A never-ending, existential crisis brimming simultaneously with boredom, dread, and a panicked descent into madness. So... you know. Like today: March 13, 2020, Part 326. As in the movie, every day is just a little bit different, but it's always very, very, horribly familiar.

But there's one big difference between Groundhog Day and this 2020-version: Groundhog Day had some perks. For example, Murray's character got to eat in a restaurant full of people. Doesn't that sound lovely? No masks. Just hanging out with your crush eating as much cake as you want because, LOL! Tomorrow won't happen. I seriously can't remember the last restaurant I went to. Also I'm pretty sure I stopped eating with a fork last May.

Another cool thing about Groundhog Day is that Murray didn't have to worry at all about any consequences for his actions. He could do whatever the hell he wanted and the next day: whatever. It doesn't matter. Groundhog Day 2020-style? All the consequences! Everything is so goddamn consequential, it's exhausting. Our raw, chapped (but throughly washed) hands and chins full of maskne stand as a testament to all the constant, looming promises of potential, scary consequences.

We even have to think about awful consequences for stuff we didn't do. Like "Your family might have COVID!" and it's like "HOW?! I literally go to the grocery store once a week!" and it's like "Well, the person ahead of you in line was in contact with someone four days before who went to an indoor Trump rally a week ago and now you all have to quarantine for 10 days!" So, you know, that's the opposite of the movie.

Oh. And also? Bill Murray was alone in the loop which, yes, is isolating, but he only had to worry about himself. He didn't have to guide anyone through the cycle with him. He didn't have to spend a small fortune ordering 200 different masks on Amazon before he finds the one that will fit his 4-year-old (which, rest assured, the child will promptly lose). There was never a scene where he had to bribe his 9-year-old with candy to sit still in a Zoom meeting (erm... not that I would ever do that).

And, seriously, let me repeat: he was alone in the loop. Do you know the last time I was alone? Neither. Do. I. I vaguely remember a version of myself that is not fetching my kids snacks but at this point it's hazy.

And yet somehow, the biggest difference is that, unlike in the movie, time has marched on, even if it hasn't felt like it. We don't get the day back every morning. Neither do our kids. Groundhog Day is billed as a comedy but I think we've seen with just a few tweaks it's clearly a horror. So: it's Feb. 2, 2021. It's Groundhog Day... again. Let's hope this year that furry monster sees whatever it has to in order to avoid six more weeks of 2020...

More Like This
Watch An Exclusive Sneak Peek At 'The Amazing Maurice'
Marcel The Shell Is Heading To The Oscars!
Pixar’s 'Turning Red' Is Nominated For An Oscar — Here’s How To Watch It Right Now
Marcel The Shell Is Officially An Oscar-Nominated Movie Star
What Parents Are Talking About — Delivered Straight To Your Inbox