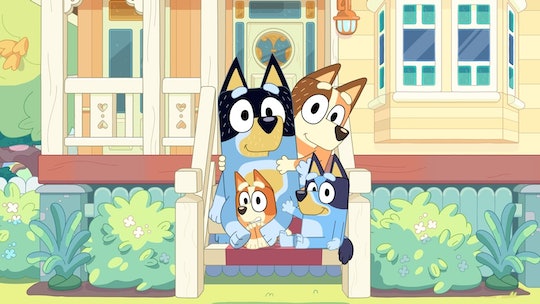 3 Reasons Parents Can Be Happy 'Bluey' Is Back

The Emmy-winning series returns to Disney+ on August 10.

The greatest Australian import since Ugg boots, Bluey returns to Disney+ on August 10. That sound you hear is your kids shrieking with joy that their favorite family of anthropomorphic cattle dogs are finally back with some new adventures. But it’s not just kids who should be happy that Bluey, Bingo, Bandit, and Chilli are back—here’s why there’s reason for parents to celebrate too.

It shows parents as people too.

It’s par for the course for children’s television to focus entirely on the young characters, relegating adults to the periphery. Bluey goes the other way, putting Chilli and Bandit (a.k.a. Mum and Dad) in the middle of the action, showing them as both active participants in their children’s games and people who benefit from the same lessons their kids learn. In other words, it’s a family-friendly show that’s truly about a family.

Imagination often comes to the rescue.

A common thread across episodes of Bluey is the fun of games and imaginative play. Some of the former include “dance mode,” a family game that gives Bingo the power to embarrass themselves by dancing in public; “shadowlands,” a challenge to cross the park while only stepping in shadows; and the appropriately named “Keepy Uppy,” a game whose sole object is to pass a balloon back and forth without letting it touch the ground.

The kind of pretend play the show spotlights is great for child development, of course, but it’s also great for parents who need a bit of a break to have kids who understand that they can entertain themselves when mom and dad want to take a break.

The episodes are the perfect length.

Every episode of Bluey comes in at a tidy nine minutes, or less than half the runtime of a standard TV show. That makes them great for keeping kids occupied during those smaller chunks of time parents seem to have like a drive to the grocery store with a grumpy kid. And with 141 episodes available once season 3 hits Disney+, it’s not like kids will mind watching a few in a row to fill up longer periods of time.