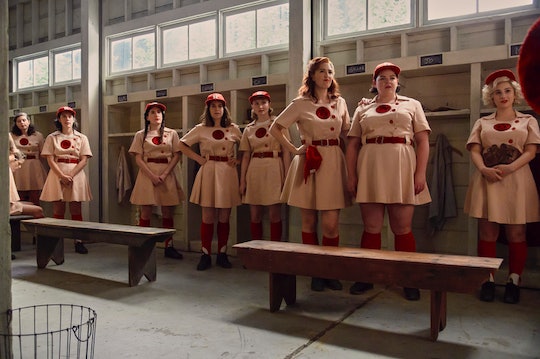 A League of Their Own Is Getting A TV Series & A Certain Rockford Peach Will Return!

The pink-and-red baseball uniforms are coming out of retirement this August when the new A League of Their Own TV series premieres on Amazon Prime Video. The series takes place in the same world as the cult classic 1992 film of the same name, directed by Penny Marshall and starring Geena Davis, Tom Hanks, Madonna, and Lori Petty. The A League of Their Own movie told the story of how women saved baseball while men were fighting in World War II, and it was masterfully done with comedy, heart, and love of America’s pastime on full display. So you may be wondering: what will the new TV series be about? Here’s everything we know so far.

A League of Their Own premieres this August.

Amazon Prime Video will exclusively premiere all eight episodes of A League of Their Own on Aug. 12, 2022. In addition to the U.S., this show will be available in more than 240 countries and territories worldwide.

It will have the same spirit as the movie.

Amazon Studios and Sony Pictures Television in association with Field Trip Productions created this highly anticipated series, which “evokes the joyful spirit of Penny Marshall’s beloved classic, while widening the lens to tell the story of an entire generation of women who dreamed of playing professional baseball,” according to a recent press release.

A League of Their Own will examine race and sexuality as a new generation of women takes the field. Although it’s set in 1943, the same time period as the movie, the series will focus on a different team and different storyline.

Abbi Jacobson is part of the all-star cast.

Abbi Jacobson and Will Graham co-created and executive produced A League of Their Own. The Broad City actress also stars as Carson.

One of the Rockford Peaches will return.

Rosie O’Donnell, who played Doris Murphy in the film, will guest star as Vi in the new series. She will not be reprising her original character, most likely because the series is set in the same world as the movie (and Doris is busy playing for the Rockford Peaches!).

A teaser trailer is out now!

Amazon Prime Video released a teaser trailer of A League of Their Own yesterday. It shows glimpses of women casually playing park baseball, drinking beer with their family, and scoring home runs in the All-American Girls Professional Baseball League. It’s set to “Edge of Seventeen” by Stevie Nicks, and it perfectly embraces the nostalgia, excitement, and pure, feminine power of this series. It’s going to be so good!

While you’re waiting for the new series, re-watch the A League of Their Own movie on Prime Video now.

More Like This
The Summer I Turned Pretty Is A Beautiful Coming-Of-Age Story For Teens & Parents
'Caillou' Is Officially Getting A CGI Reboot Whether People Like It Or Not
13 Going on 30 Is Just As Sweet & Funny As You Remember — And Kids Will Love It Too
'Clueless' Is, Like, Totally Still A Good Teen Movie In 2022