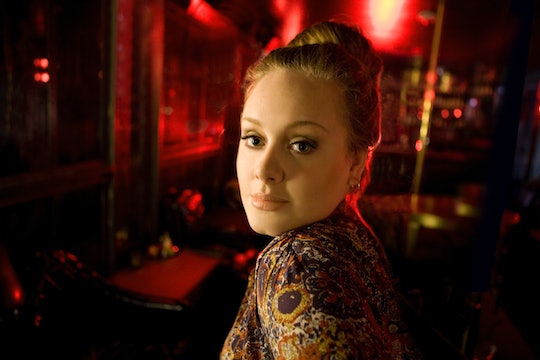 “I can’t make that make sense to a nine-year-old.”

Roughly two years after she separated and filed for divorce from then-husband Simon Konecki, Adele has revealed she struggled to fully explain divorce to her son Angelo. In a series of rare interviews with Vogue and British Vogue, the Grammy Award-winning singer opened up about how 8-year-old Angelo, whom she shares with Konecki, had a lot of questions about his parents' divorce that Adele couldn’t always answer.

“My son has had a lot of questions. Really good questions, really innocent questions, that I just don’t have an answer for,” Adele told British Vogue.

According to Adele those questions included things like why Adele, Konecki, and Angelo couldn’t all continue to live together in the same house — to which Adele responded, “That’s just not what people do when they get divorced.”

“But why not?” she said her son pressed. “I’m like, ‘I don’t f-king know. That’s not what society does.’” Adele told Vogue her son also asked her why she didn’t love his dad anymore. “I’d be like, ‘I do love your dad. I’m just not in love.”

“I can’t make that make sense to a nine-year-old,” she said.

Adele said she began to have regular conversations with Angelo, who turns 9 this month, about the divorce after it became apparent that he was being impacted emotionally by the changes. “He said to my face, ‘Can you see me?” Adele told Vogue of a day when Angelo was just 6 years old. “And I was like, ‘Uh, yeah.’ And he was like, ‘Cause I can’t see you.’ Well, my whole life fell apart in that moment. He knew I wasn’t there. That’s when I started sharing with him.”

Adele and Konecki welcomed their son Angelo in October 2012, roughly 10 months after they took their relationship public. While speaking to fans at a show in March 2017, Adele confirmed she and Konecki had gotten married, but refrained from revealing exactly when it had happened. In the spring of 2019, however, it was reported that the couple had separated with Adele officially filing for divorce in September of that year. Their divorce was finalized earlier this year along with a shared custody agreement, according to the BBC.

In an effort to keep Angelo’s life as simple as possible, Konecki now lives across the street from Adele and the three hold regular family movie nights, according to Vogue.

At least one song on Adele’s upcoming album was written by the English singer-songwriter for Angelo. In fact, Adele told Vogue and British Vogue she wrote it the day after her son told her he couldn’t see her and that it contains snippets of conversations she’s has had with Angelo as well as an emotional voicemail she left a friend.

“I just felt like I wanted to explain to him, through this record, when he’s in his twenties or thirties, who I am and why I voluntarily chose to dismantle his entire life in the pursuit of my own happiness,” Adele said in an interview with British Vogue. “It made him really unhappy sometimes. And that’s a real wound for me that I don’t know if I’ll ever be able to heal.”

Adele told Vogue she hoped her son seeing her pursue her own happiness might help to one day alleviate the guilt she feels for the unhappiness and hurt her divorce caused Angelo. “If I can reach the reason why I left, which was the pursuit of my own happiness, even though it made Angelo really unhappy — if I can find that happiness and he sees me in that happiness, then maybe I’ll be able to forgive myself for it,” she said.