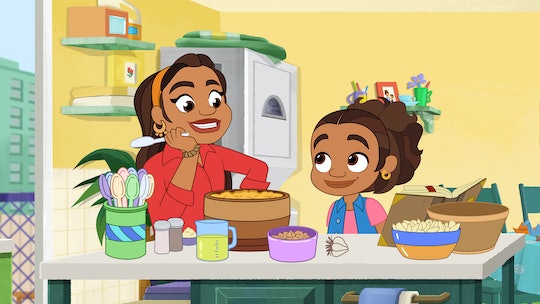 A new animated series is coming to PBS Kids that promises to introduce viewers to Latin cultures. Created by Sonia Manzano, who delighted viewers as Maria on Sesame Street for more than 40 years, Alma’s Way centers around a 6-year-old Puerto Rican girl who lives in the Bronx with her family. In a clip from Alma’s Way exclusively shared with Romper, Alma attempts to figure out how she can fix the mistake she’s made with her mother’s mofongo.

As the newest show from Fred Rodgers Productions — which has brought children Daniel Tiger’s Neighborhood and, of course, Mister Roger’s Neighborhood — Alma’s Way aims to help children age 4 to 6 learn to appreciate and respect others’ unique heritage and cultures. Each episode of the upcoming animated series will introduce children to different aspects of Latino cultures, including food, music, language, and traditional customs.

In an exclusive clip shared with Romper, viewers get a sneak peek at one of Alma’s signature “Think Through” moments. In this one, Alma realizes she’s messed up her mother’s mofongo, a traditional Puerto Rican dish made with mashed fried green plantains, and stops to process what happened and what can be done.

“Everyone is already here for dinner and I've made Mommy’s mofongo worse,” Alma says in the clip. “I don’t know what to do. I’ve got to think about this.”

To figure out where she went wrong, Alma thinks back on what she did, revealing to viewers that she’d tried to talk to her mother about the mofongo while her mom was in the middle of an important task. Instead of waiting for her mother to be free, Alma took matters into her own hands and added ingredients to the mofongo with disastrous results.

“What should I have done instead?” the determined 6-year-old asks herself (and viewers).

It’s then that Alma remembers her father expressing gratitude when her mother gave him her opinion on something he’d cooked. “I should have waited till Mommy wasn’t busy and told her what I thought of her mofongo instead of trying to fix it myself,” she concludes.

PBS Kids tells Romper they hope the show will not only resonate with young Latino viewers but also help all children see how kids and families of all ethnicities and cultures can be both alike and different at the same time. Additional themes like critical thinking, problem solving, and the importance of expressing what you think and feel have also been infused into each episode.

Alma’s Way premieres Oct. 4 on all PBS Kids platforms and will be available to viewers in both English and Spanish.

More Like This
Exclusive Eureka! Clip Introduces Star Of Disney’s New STEAM Preschool Series
'Caillou' Is Officially Getting A CGI Reboot Whether People Like It Or Not
Elmo Talks About Getting His Covid Vaccine In A Cute New Video
Viral TikTok Breaks Down How Beautifully Bluey Depicts One Character’s Infertility