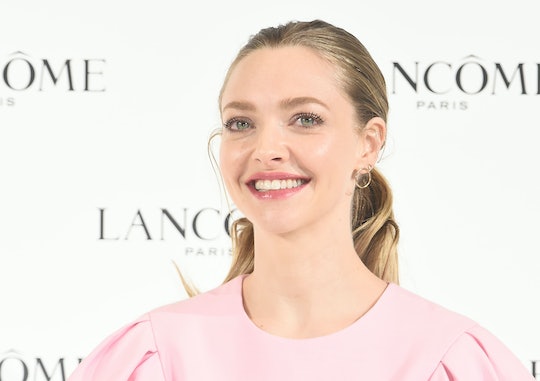 Little Nina helped her mom get ready for the awards show

Stylin' and profilin', with a little help — Amanda Seyfried's 2021 Golden Globes look got some help from the actress' 3-year-old daughter. There's a lot of work that goes into getting ready for an event like the Golden Globes, but this proud mom got some help from her toddler Nina. Seyfried was nominated for a Golden Globe for her role as Marian Davies in Mank. And while the show was attended virtually by many viewers, nominees ,and presenters alike, stars didn't miss the opportunity to get all dolled up.

In her Instagram Story before the show, Seyfried shared a photo of her daughter Nina brushing her hand with a makeup brush. "I wouldn't let her do my makeup tonight so she brushed my hand," Seyfried wrote on the post. And her time with Nina didn't end after they were getting ready. During her pre-show interview, Seyfried shared that she was watching the Golden Globes in a hotel with her family and her team. "I wouldn't be able to be here with my kids if I were there on the red carpet," she told interviewer Zuri Hall.

Seyfried's Golden Globe-nominated film transports viewers to the Golden Age of Hollywood as the witty — and often intoxicated — screenwriter Herman J. Mankiewicz works to finish Citizen Kane. Seyfried glows on screen as Marian Davies and her glamorous Golden Globes look reflected the elegance that she brought to the film.

With an audience packed with "smoking hot first responders," Seyfried and the lengthy list of other nominees watched the awards from their homes — or hotels. But the upside is getting to involve little ones in the process. Talk about a family affair.