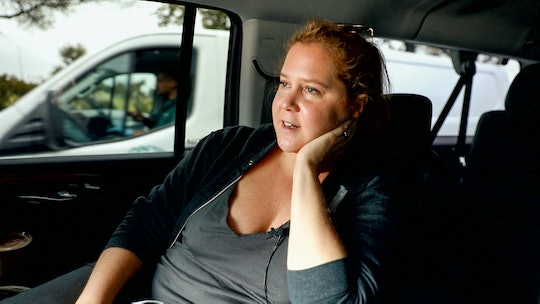 There’s a moment in the new HBO Max documentary Expecting Amy where Amy Schumer is asked if she’s feeling resentful towards her pregnancy. Though it’s only 40 minutes into the three part series, Schumer’s already thrown up from what would later be diagnosed as hyperemesis gravidarum more times than you can count. But the comedian maintains it’s not the pregnancy she has any anger towards. “I resent everyone who hasn’t been honest. I resent the culture at how much women have to suck it the f*ck up and act like everything’s fine. I really resent that,” she replies in the doc. And now, over a year after she gave birth to her son Gene, she’s still just as angry.

“I was almost in my third trimester by the time I was finally diagnosed because women in general aren't taken seriously about their pain in medical fields,” Schumer tells Romper. “My biggest takeaway from being pregnant [was] getting educated about different women's experiences. I think it changed the course of my life.” First and foremost, it’s inspired her to have more honest conversations about pregnancy with those in her inner circle. Something that the comedian — who’s made a career of laying her sexuality, body image, and other personal struggles bare on the stage — was shocked women weren’t doing more of. “I’ve been friends with people for 30 years and none of them had really shared how hard their pregnancies were with me,” she says. “Even amongst women we’re supposed to minimize how difficult [pregnancy is]. You're supposed to be like, ‘Oh no, it was easy for me. Just popped him right out.’ And it's like, no. It's really hard.”

Now, Schumer is bringing her brand of stigma-busting to menstruation by partnering with Tampax for a series of equal parts comedic and educational videos teaching people about periods and tampons. “It's not anything new to be trying to shame women and scare them into less convenient techniques,” Schumer says of the rampant spread of misinformation about the negative effects of tampons.

Up next for Schumer? Encouraging women to shove their tampons all the way in. “[There are times] where I'll go back to the writer's room or something and I'll be like, ‘I'm sorry. I can still feel my tampon and I have to get up and go in and push it in a little further,’” Schumer jokes of the all-too-familiar sensation of improper tampon insertion. “What people don't know is you have to push it in until it's really in. That seems like such a basic thing, but so many women don't know that. And why would they? Because no one's telling us.” Nobody except for Schumer, that is.