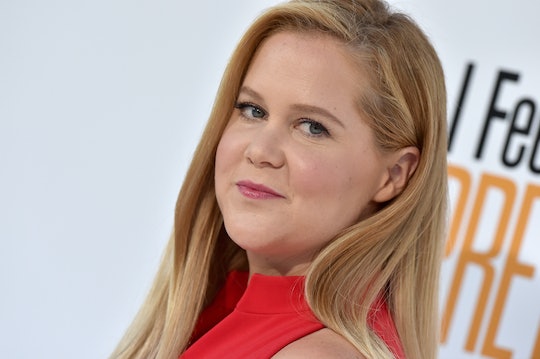 And he appeared adorably underwhelmed.

Celebrities often say that their kids have no real concept of their being famous. And that appeared to be the case on Sunday night when Amy Schumer's son watched her on TV for the first time when her commercial for Hellman's mayonnaise came on and, of course, the proud mama recorded the moment for posterity (and Instagram).

Little Gene, almost 2, wasn't the only one watching last night exclusively for the commercials. According to a survey from the National Retail Federation, 22% of Super Bowl viewers watch primarily to see the ads, widely acknowledged as the best commercials of the year. They have every reason to wow audiences: the "big game" is the most watched event of the year. Companies pay a premium for their 30-second spots – an average of $5.5 million according to reporting from Fast Company.

In Schumer's commercial, a man rummages through his fridge, wondering what to make with the food inside. ("What even is an artichoke?") Schumer appears as his golden-winged "fairy god-mayo" who, with a wave of her magical butter knife, can whip up cake, dip, sandwiches, nachos – a perfect game day spread. "What else can you do?" the man asks "Absolutely nothing," she replied in her trademark self-deprecating humor. "Like... nothing."

Schumer recorded Gene, on father Chris Fischer's lap, watching the commercial as she watches the toddler for a reaction. Gene stares at the screen, intently but blankly. "Was that mommy?" she asks when it ends, only to receive a non-committal, unbothered response.

Oof. So cold it burns, Gene. Toddlers are truly the most vicious critics if only through their inability to be impressed by anything that 's not Elmo or, like, an empty cardboard box. Kids are weird.

Watch the commercial below, so you can see what Gene was so blasé about.

Don't let the baby get you down: we're always excited to see you on TV, Amy!