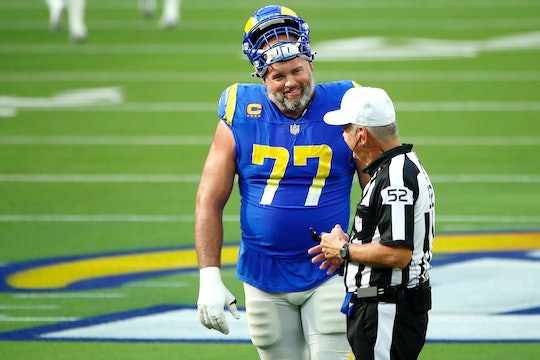 The daughter of the Man of the Year is unbothered.

What do you do when your dad is playing what is likely his last game of professional football, ever, and it’s also the Super Bowl? You bring a book. And you sit back and read that book. At least according to Andrew Whitworth’s daughter.

Andrew Whitworth, NFL Man of the Year for 2022, Rams Left Tackle, and most importantly, father of four kids experienced the very expression of being a dad as he went to work, and his daughter...took out a book/magazine and started reading. And the internet has a lot to say about it. And don’t worry, it’s all positive and hilarious. (At least the tweets and commentary we are choosing to read.) People are dying over how absolutely unbothered his daughter is. She has seen probably hundreds of games in her short life, and she knows what’s happening. The likelihood that she does nothing but read the entire game is low, but the fact that when cameras were on her she just didn’t care to put it down? In our opinion she is a literate queen. A bibliophile blessing. A gift.

OK, don’t you love this idea? Let the kids have fun reading, and let the librarians run with it. It’s a win all around if you ask us.

I mean, mine too, to be honest. Football starts and stops a whole lot, and what else do you do during down time but read and eat nachos? It’s a vibe. And we love her for it.

More Like This
Chris Pratt Says He "Cried" About That "Healthy Daughter" Instagram Post Controversy
Elon Musk's Child Files To Change Name, No Longer Wants To Be "Related" To Father
Viral TikTok Breaks Down How Beautifully Bluey Depicts One Character’s Infertility
Sox The Cat Is The Companion We Never Knew Buzz Lightyear Needed