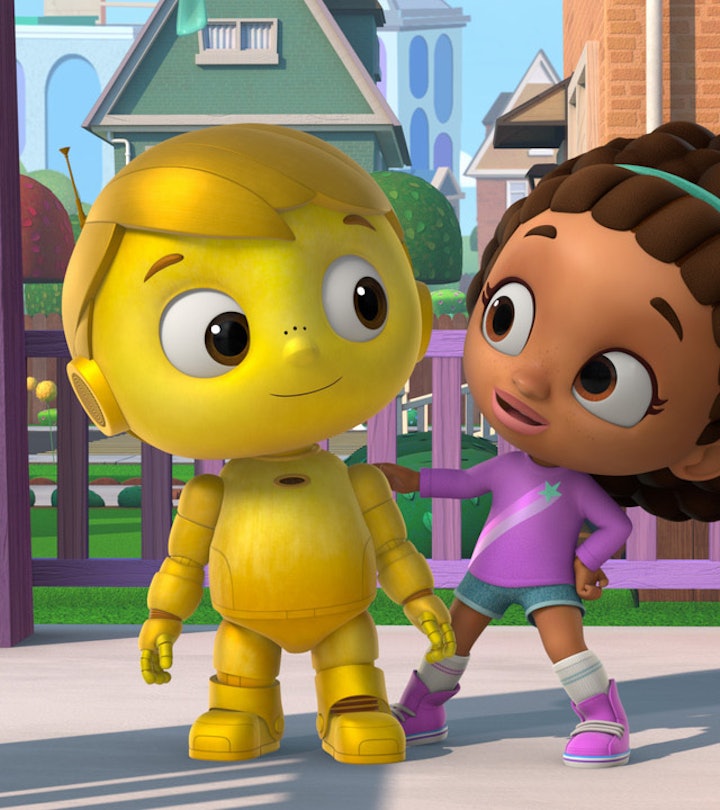 And see why this curious young robot is going to quickly become your kid's favorite character.

In a new animated series, DreamWorks and Apple TV+ take children inside the pages of Dan Yaccarino's beloved picture book series Doug Unplugged to bring the fun-filled friendship between a young girl and a curious boy robot to life. And just ahead of its premiere, you can get an exclusive peek at the Apple TV+ series Doug Unplugs — and learn why this little yellow bot is sure to become your child's favorite TV character.

If your child already knows and loves the Doug Unplugged series, then they're sure to become instant fans of the animated series Apple TV and DreamWorks have whipped up. But even children who've never met Yaccarino's characters will find themselves immersed in a world of adventure, learning, music, and fun in Apple TV's Doug Unplugs.

"Kids and parents will find themes that are more relevant than ever!," Doug Unplugs executive producer Aliki Theofilopoulos tells Romper. "In our show, we highlight how important it is to balance technology with experience. We know tech is an increasingly important part of our children's lives, but we are also asking kids to let technology be a resource that adds to their curiosity and inspires them to then go out and explore the world in big and small ways!"

Like the book series, Doug Unplugs centers around a young yellow robot named Doug who starts each day by plugging in for an information download. But after downloading facts and figures about the city he lives in, Doug wonders if he might actually learn more by unplugging and going outside to explore. When Doug befriends a human girl named Emma, he discovers there's a lot he doesn't know.

What is fun? Why do people play? Can he download an imagination?

But rather than head home to plug in for another information download, Doug decides that the best way to learn about the world is to experience it firsthand with Emma.

In fact, the friendship Doug builds with Emma is a very special part of Doug Unplugs. "I love Doug and Emma's friendship," Theofilopoulos tells Romper. "Their friendship, care, and curiosity drive them to new adventures and shared experiences that we really hope inspires kids and families who are watching. Seeing the way they discover the world together is just so charming."

In an exclusive clip shared with Romper, Doug and Emma get their families together for an evening out. But for as knowledgeable as they are, neither Doug nor his robot parents have ever seen a restaurant menu before.

"What is this giant book for," Doug asks Emma.

"It's a menu," Emma says. "It lets you know about all the different food they have here."

Misunderstanding the menu's function, Doug's robot mom reads the menu out loud as one would read a book to a child. "Once upon a time, there was a turkey meatloaf who was served with your choice of potato, soup, or mixed seasonal salad with club sauce," she says.

The clip is evidence of the fun and jovial spirit woven throughout Doug Unplugs, which takes children along on Doug's journey of adventure, discovery, and friendship.