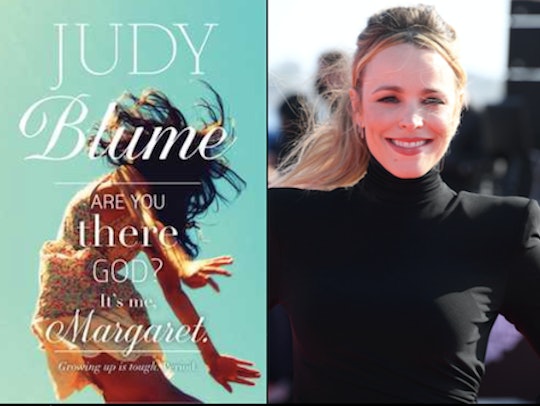 Are You There God? It’s Me, Margaret Is Finally Heading To The Big Screen

For decades Judy Blume has been The Queen of Coming-of-Age Books, and there’s no title more iconic than her beloved and often banned novel Are You There God? It’s Me Margaret. From boys to bras, tampons to spin the bottle, this book is practically a textbook for what it’s like to struggle-bus your way through adolescence (when you didn’t even have the internet to ask all those embarrassing questions!). Here’s what we know about this classic teen read’s long-awaited adaptation to the silver screen.

In Are You There God? It’s Me Margaret, McAdams, who is a mom of two, will swap her Mean Girls heels for some mom jeans when she plays the part of Barbara, Margaret’s well-intentioned mother.

Entertainment Weekly was the first to report this exciting casting, and McAdams is ready for her role that was expanded beyond the book. “I felt like Kelly [Fremon Craig, the director] drew a mother that was on a parallel journey with her daughter and trying to be a mom, but also be a person. [She] is a very supportive mother but also wants to give her child a sense of independence and autonomy and let her go through the wonders of life herself and not cloud those too much with her own ideas of how you should and should not be... It is just a real cacophony of honest, truthful things women and mothers experience on a whole,” she said in an interview with The Hollywood Reporter.

For over 50 years, the famous author refused to adapt her books.

YA fans everywhere can finally breathe a bookish sigh of relief that Judy Blume, who is now 84, had a change of heart and decided to adapt her incredibly relatable novel. The famous author has penned over 25 books, and will even have a hands on-role in the film with co-writer and Executive Producer credits.

So far it sounds like Blume will be on-set to make sure the movie is faithful to the book and also keep the ‘70s vibe alive. Like the rest of us, she’s all in on the casting of McAdams. "I'm so excited that Margaret got a funny, sexy, sassy mom in Rachel,” said the iconic author in an interview with EW.

Who knows, maybe Blume is even a fan of Hailee Steinfeld, who played the lead role in the critically acclaimed teen movie, The Edge of Seventeen. The upcoming adaptation of #AYTGIMM (yes, the book even has its own hashtag) will come together under the leadership of writer-director Kelly Fremon Craig and producer James L. Brooks, the same team behind the spot-on The Edge of Seventeen.

What is the book about?

Margaret Simon, who will be played by actress Abby Ryder Fortson, is a precocious almost 12-year-old who moves from New York City to the suburbs of New Jersey. While the tween’s quest for bigger boobs is what many readers might remember, this poignant book is also about finding a religion that resonates and a young girl’s search for meaning in life. The book is also a lovely ode to mother and grandmothers, as well Blume’s home state of New Jersey.

Fun fact: the title is also the first line of the book.

When will Are You There God? It’s Me Margaret hit theaters?

Just in time for fall favorites like pumpkin spice lattes, the film is scheduled to be theatrically released on Sept. 16, 2022. Fans will have to wait for a sneak peek of the movie, too. So far, the trailer has not been made available to the public, but received raves and big laughs at CinemaCon when, according to Deadline, it closed with the classic mantra, “We must, we must, we must increase our busts.”

In the meantime, you can always grab a book at your local library or fave bookstore. Even if you get a copy with a controversial cover that left some readers in a tizzy, it’s what’s written on the inside that counts and will stay with you forever.

More Like This
Karamo Brown Teamed Up With His Son On A New Children’s Book To Share A Powerful Message
Disney's Enchanted Sequel Follows Princess Giselle As A Suburban Mom On A Mission
'Top Gun: Maverick' Is More Tween-Friendly Than The Original
Kate Middleton Explains Why Her Kids Couldn't Attend The Top Gun: Maverick Premiere