Nancy Meyers We ❤️ You 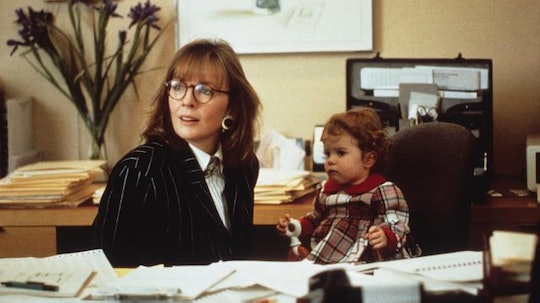 Baby Boom Is An ‘80s Love Letter To Working Mothers — 35 Years Later, It Holds Up

My mom and I watched Baby Boom together the other night. When I was little, we watched our taped-off-TV VHS copy until it was so worn out it barely played, and I think we kind of felt like the movie itself belonged to us. Baby Boom was shorthand for comfort in our two-person home. Until this recent viewing, though, Mom and I hadn’t watched it in at least 20 years. I hadn’t felt the need to, because the movie was so embedded in my being, in my sense of self — I am Miranda, my mom and I love Baby Boom. I hadn’t considered how differently this classic Nancy Meyers rom-com take on working motherhood might land now that I am a mother myself. I was pleasantly surprised to find that, if anything, it has only gotten more powerful in the 35 years since it was released.

As a kid, I think Baby Boom was comforting to me in large part because I got to see the dynamic that defined our home — a household with just a mother and a daughter — play out on screen in a positive light. Watching J.C., played by Diane Keaton, juggle the demands of work, motherhood, and managing a house (there are a lot of excellent scenes involving a plumber and some classic Keaton hysterical screaming) felt like a glance into my mom’s grown-up world. I loved her, and I loved it. I knew she worked really hard, and I saw that reflected in J.C.

Now, as a mom, what I deeply love about this movie — and what I suspect hit home for my mom when she first watched it — is quite simply that a working mom wins.

Working motherhood aside (though that is unquestionably at the crux of the film), Nancy Meyers and her co-writer Charles Shyer wrote a perfect movie about what a complete and total wrench in adult life a baby can be. Baby Boom opens with shots of a sea of shoulder-padded, power-suited 1980s office workers rushing down the streets of Manhattan, accompanied by a perfect voiceover, narrated by Linda Ellerbee:

53% of the American workforce is female. Three generations of women that turned 1,000 years of tradition on its ear. As little girls, they were told to grow up and marry doctors and lawyers. Instead, they grew up and became doctors and lawyers. They moved out of the "pink ghetto" and into the executive suite. Sociologists say the new working woman is a phenomenon of our time. Take J.C. Wiatt, for example. Graduated first in her class at Yale, got her MBA at Harvard. Has a corner office at the corner of 58th and Park. She works five to nine, makes six figures a year, and they call her the Tiger Lady.

Minutes into the movie, J.C. is asked to be a partner in the financial firm where she works. Her boss, Fritz, takes her out to dinner and asks if she understands the sacrifices she’ll have to make and talks about the fact that his wife raised his kids. “I'm lucky,” he says. “I can have it all.”

That night she gets a call. An inheritance from a distant cousin in England that turns out to be — thanks, Hollywood — a baby. A caretaker tries to hand off the baby in the middle of a bustling airport. Stunned, J.C. juggles her briefcase and the baby, saying "Well, that's the funny thing. I can't have a baby as I have a 12:30 lunch meeting."

Baby Boom sometimes gets criticized because it is full of easy fixes and soft landings, but I love that. I need it to be that. It’s a rom-com about working motherhood — an escapist, soothing fairy tale.

Watching it now, the arrival of the baby, named Elizabeth, strikes me as the silly movie version of what it really feels like when you have a baby for the first time. You only know that you’re not qualified at all. You're massively inconvenienced. You fall in love.

Baby Boom sometimes gets criticized because it is full of easy fixes and soft landings, but I love that. I need it to be that. It’s a rom-com about working motherhood — an escapist, soothing fairy tale. Working moms need escapism, too. We need to see ourselves on screen and laugh at the ridiculousness of it all.

Just like every baby's, Elizabeth’s arrival is a catalyst for transformation. And it is the movie’s great love story: the rom in this rom-com.

It’s a tale as old as time, really: hardworking woman makes a hard choice and comes out on top.

Working moms want to believe it’ll all work out — particularly when we cannot see how it’s all going to. We juggle, and juggle, often forced into making choices that are far from ideal and not really a choice at all. The great love story of our real lives — the catalyst, the great paradigm shifter of our existence — will usually win. It doesn’t mean we don’t still want things we’ve always wanted and worked hard for, though. We need warm, funny fairy tales, too.

In the movie, Elizabeth arrives and right away, J.C. loses her relationship, and shortly after, she quits her job. Babies really do change everything.

When J.C. walks away from her corner-office, Park Avenue, power-broker job, it’s possible to read it as defeat. But, watching it as a working mom, I read it as the recognition that her path simply doesn’t fit into antiquated structures. So, she takes her power — her skill, her brilliance, her speed and work ethic — and walks out the door with it.

In his 1987 review, Roger Ebert wrote, "All of this is too good to be true, of course, but that's why I enjoyed it. The flaw in Baby Boom is that the Keaton character ends up not having sacrificed a single thing by leaving the business world to become a mom. In fact, she becomes a millionaire as a direct result of keeping the baby. It doesn't often happen that way, but of course it should."

It should. For my mom — in a way — it did. She didn’t become a millionaire, but she was able to nurture a fruitful and satisfying career as a history professor while raising me. As we talked about the movie and what it meant to us after our recent rewatch (a conversation we had never thought to have), I wondered how it felt to her that the issues that J.C. faces still resonate with her own working-mother daughter all these years later. Reflecting on her own life, which has veered many times from what was “expected” of her as a little girl growing up in a small Midwestern town in the 1950s, she said: “There were critical moments where I did things in a way that was different from the world around me and that changed the course of my life.”

The path of modern working motherhood is hard, under-supported, and not so different from the path our mothers walked — certainly not different enough.

There’s a scene near the middle of the movie, not long after J.C. has left her job and moved with the baby to Vermont — the Baby Boom version of the free-fall into the unknown that every working mother has made at some point — that strikes me as a perfect microcosm of the movie itself. Elizabeth and J.C. are snuggled in bed, in a very particular halo of soft, pastel light that belongs exclusively to the late ‘80s and early ’90s. She’s telling the baby a bedtime story — a fairy tale of her own making, laced with her wishes for Elizabeth, even as her own path has been so freshly wrenched:

And then the prince kissed Sleeping Beauty. She woke up and looked into the prince's eyes, and you know what she said? She said "Thank you for waking me, Prince, because I overslept, and I have medical school today. I'm going to be an important doctor one day like all women can be. And you know what they did? They made a date to meet each other after her graduation."

The path of modern working motherhood is hard, under-supported, and not so different from the path our mothers walked — certainly not different enough. We hope it will get better. We will fight to make it better for our daughters and their daughters. Whatever the world looks like when my kids grow up, this is a story I want them to have in their psyches. I want them to want it all, to believe that they deserve professional satisfaction and a full home life. To know when to reject the status quo and take a leap.

Change is slow. But, in the meantime, at least we have better fairy tales than our mothers and grandmothers grew up with. We have Baby Boom.