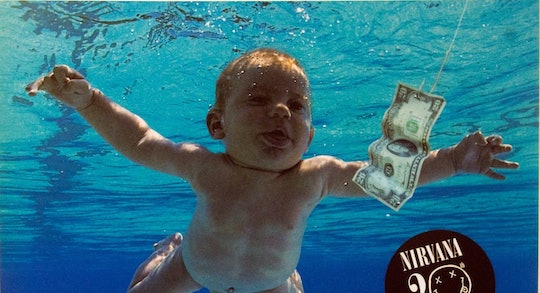 While you may not immediately recognize Spencer Elden’s name, you’ve likely seen a photograph of him. A snapshot of him swimming naked as an infant graced one of the most recognizable album covers of all time: Nirvana’s 1991 Nevermind album. But now, 30 years later, Elden is suing the band. In a lawsuit filed Tuesday, Elden accused the band of committing commercial child sexual exploitation and violating federal criminal child pornography statutes.

In his lawsuit, Elden alleged Nirvana and their record labels knowingly and intentionally produced and distributed “child pornography depicting Spencer” with the knowledge that they would value for having done so. The lawsuit alleged Nirvana continues to benefit from their commercial sexual exploitation of Elden to this day and that, as a result, he has suffered lifelong damages.

“Defendants intentionally commercially marketed Spencer’s child pornography and leveraged the shocking nature of his image to promote themselves and their music at his expense,” the lawsuit reads. “Despite this knowledge, Defendants failed to take reasonable steps to protect Spencer and prevent his widespread sexual exploitation and image trafficking.”

So how did a naked 4-month-old Elden wind up on the cover of Nevermind? According to Elden, who recounted the story in a 2015 column for The Guardian, photographer Kirk Weddle was a friend of Elden’s father and asked him if he’d like to have his 4-month-old photographed for a project Weddle was working on. “My parents took me down there,” Elden wrote for The Guardian. “Apparently they blew in my face to stimulate my gag reflex, dunked me in, took some pictures, and pulled me out. And that was it. They were paid $200 and went to eat tacos afterward. No big deal.”

Elden wasn’t the only baby photographed as part of the project. But in the end, Nirvana chose his photo for their album cover. “I am glad they chose me,” Elden wrote. “It’s always been a positive thing and opened doors for me.” In fact, Elden claimed it was his photo on the Nevermind album that landed him a 5-year stint working with street artist and OBEY clothing founder Shepard Fairey.

Over the years, Elden has recreated the famous underwater album cover multiple times. According to Spin, he posed for a recreation photo for the album’s 10th anniversary in 2001, and then again in 2008 and 2011. In 2016, Elden recreated the photograph for a fourth time in exchange for $200 from photographer John Chapple, the New York Post reported, adding Elden had originally wanted to recreate the photograph fully nude but was talked out of it by Chapple.

Somewhere over the years, however, Elden’s feelings about the Nevermind album changed. In a September 2016 interview with GQ Australia, Elden said he was “pissed off” about the album cover. When asked when his feelings about the cover had changed, Elden revealed he’d recently attempted to reach out to members of Nirvana about collaborating with no luck. “I was reaching out to Nirvana to see if they wanted to be part of my art show,” Elden told the magazine. “I was getting referred to their managers and their lawyers. Why am I still on their cover if  I’m not that big of a deal?”

In his lawsuit, Elden alleged he experienced “permanent harm” in the form of “extreme and permanent emotional distress with physical manifestations, interference with his normal development and educational progress, lifelong loss of income earning capacity, loss of past and future wages, past and future expenses for medical and psychological treatment, loss of enjoyment of life, and other losses to be described and proven at trial of this matter.”

He is seeking $150,000 in damages from each of the named defendants, including Weddle, Kurt Cobain’s estate, every living member of Nirvana, Universal Music, Geffen Records, Warner Records, and MCA Music.

Romper has reached out to Universal Music for comment. Neither members of Nirvana nor those in charge of Kurt Cobain’s estate have commented publicly on the lawsuit.

More Like This
Freeze! The Single From The New 'Bluey' Album Just Dropped
The Purple Wiggle Is A Total Thirst Trap & Moms Are Drinking Him Up
Blue Ivy Joined Her Mom Beyoncé On Stage To Perform “Brown Skin Girl”
Priyanka Chopra Posed On The Cover Of 'Vogue' With 1-Year-Old Daughter Malti
What Parents Are Talking About — Delivered Straight To Your Inbox