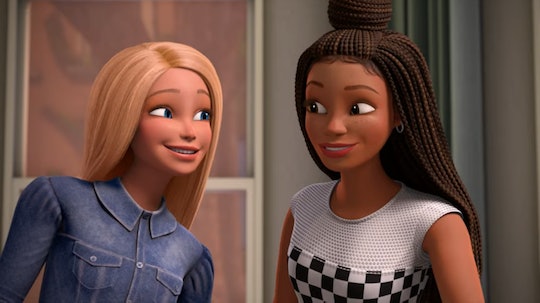 What’s better than one Barbie? Two Barbies, of course!

Barbie Roberts of Malibu, California met Barbie Roberts of Brooklyn, New York last summer at an exclusive performing arts camp in the movie Barbie: Big City, Big Dreams. Giving each other the nicknames “Malibu” and “Brooklyn,” the two became fast friends... a friendship we’ll get to learn more about in the series Barbie: It Takes Two coming to Netflix on April 8... and we’ve got an exclusive peek at what’s in store.

The series will bring us back to the prestigious Handler School of Performing Arts in New York City, where the Barbies are going to be going to school. But the road to stardom is never easy, and the pair will soon learn they can’t just rely on their considerable talents. They’ll need to lean on their friends, family, and each other to make their dreams come true.

Heartwarming and funny, the show will feature original new music and choreography (so good luck when your kiddo tries to make you learn it with them!) and is the first Barbie television series since Dreamhouse Adventures.

“We look forward to broadening the scope of Barbie content with our return to the series format,” says Fred Soulie, Senior Vice President and General Manager of Mattel Television. “What lies ahead for both Malibu and Brooklyn reinvigorates the brand with a whole new perspective that heightens the sense of adventure, fun and friendships.”

“Barbie has been inspiring, empowering, and entertaining kids for decades,” adds Senior Vice President & Global Content & Executive Producer of Mattel Television, Christopher Keenan. “The series follows the girls’ hilarious and empowering adventures in friendship, sisterhood and family, all while discovering their limitless potential.”

In this clip, we see the Barbies plotting (nicely, you know, like Barbie would do) to convince their parents to let Brooklyn and Malibu be roommates... and we would be remiss if we did not mention that Brooklyn’s family’s apartment is, perhaps, the swankiest NYC digs we’ve ever seen.

The first installment of 13 episodes of Barbie: It Takes Two will debut on Netflix on April 8 with additional episodes debuting in fall of 2022.