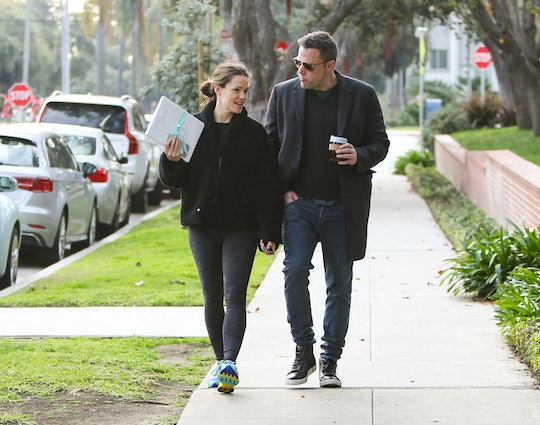 The actor thanked his ex-wife for “all the good” she does for their three children.

While Ben Affleck and Jennifer Garner have been officially divorced for three years, it’s clear the pair, who share three children, still have a deep appreciation for each other. Case in point, Affleck recently showed his gratitude for Garner with a Mother’s Day post on Instagram. In it, the Justice League star expressed heartfelt praise for all the good Garner does for their kids and shared a cute throwback family Halloween photo.

“So happy to share these kids with you,” Affleck wrote Sunday while sharing a handful of older photos that featured Garner and their three kids over the years. “Thanks for all the good you do. Happy Mother's Day. Love, their Dad.”

Although the post was a clear celebration of Garner and the work she puts in as a mother, Affleck couldn’t help but toss in a subtle tribute to his three kids, 15-year-old Violet, 12-year-old Seraphina, and 9-year-old Samuel. In his post, he referred to himself and Garner as the “luckiest parents in the world.”

Among the photos Affleck shared Sunday was a sweet photo of the family dressed as characters from the Wizard of Oz. On the right, Affleck stands in a Tin Man costume while Garner, dressed as Glinda the Good Witch, wears a pink sparkly gown and crown on the right while holding Samuel, then a toddler dressed in a Cowardly Lion costume. Between them, Violet, dressed as Dorothy, and Seraphina, dressed as the Scarecrow, stand on a haybale.

Other photos shared by Affleck on Sunday include one of Garner breastfeeding a newborn Samuel as Violet and Seraphina look on and a video clip of her whispering, “Don't tell anyone, but I think I'll be home for bedtime."

Affleck and Garner first met while filming Pearl Harbor in 2001, according to Us Weekly. However, it wasn’t until they were both cast in the 2003 Blockbuster Daredevil that romantic sparks began to fly. At the time, both were in other relationships at the time — Garner was married to Scott Foley and Affleck was engaged to Jennifer Lopez, who he’s recently been seen hanging out with. It’s not immediately clear when their relationship officially began although Affleck has admitted they “fell in love on 'Daredevil.” The pair didn’t officially step out as a couple, however, until both of their previous relationships had ended.

In June 2005, Affleck and Garner were married in an intimate ceremony officiated by Garner’s Alias co-star Victor Garber. Six months later Violet was born, followed by Seraphina in 2009, and Samuel in 2012. Then in 2015, a full 10 years after they were married, the pair announced they were separating. Their divorce was finalized in 2018.

Since then, however, Affleck and Garner have remained committed to amicably co-parenting their children. "When our kids get married, we’ll dance, I know that now,” Garner told The Hollywood Reporter in March. “We’ll boogaloo and have a great time. I don’t worry about that anymore.”

More Like This
Adele’s Grammy-Nominated Album Features A Beautiful Song Written For Her Son Angelo
Brandi Carlile Is “Finally Cool” To Her Two Adorable Daughters
Sally Field Is The Ultimate Cool Mom Who Once Tried To Set Her Son Up With An Olympian
Marie Kondo Gives Up Tidying Post-Kids, Sparking Joy For Moms Everywhere
What Parents Are Talking About — Delivered Straight To Your Inbox