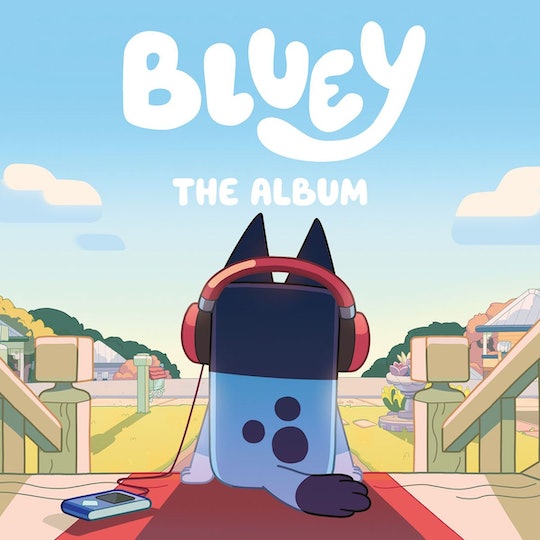 ATTN: A Bluey Album Is Coming To Spotify, iTunes, & More

Complete with classics like "Keepy Uppy" and "Here Come The Grannies."

Having trouble tearing your kids away from the TV when Bluey is on? Then, boy, do I have good news for you. You can soon take the fun with you in the car, on your walks, or anywhere else you'd like to with Bluey: The Album. The first singles “Keepy Uppy,” “Here Come The Grannies," “Instrument Parade,” and two new versions of the show's adorable theme song are available now to stream and download from Amazon, Apple Music, iTunes, Spotify, and YouTube Music. And the full album from BBC Studios and Demon Music Group LTD will be available in the U.S. on Jan. 22 across all major streaming platforms.

If you somehow have no idea what I'm talking about, allow me to introduce you to what is possibly the most watchable kids' show in existence. Bluey is an Australian children’s series that has taken over the globe with its look into the emotional and imagination-fueled life of families with young children. The show follows Bluey — a 6-year-old Blue Heeler dog — who spends her days playing with her mom, dad, and younger sister. Together, the family navigates life's challenges with a series of creative games that your kids will love. It's no wonder the show's songs are a hit with kids.

And now you can have all your favorite Bluey songs in one place. All 17 songs on Bluey: The Album are original compositions from Season 1, including song like “Grannies,” “Pool,” and “The Creek."

Bluey’s composer, Joff Bush, worked to create the album with his music team and the sweet cover art is courtesy of the show's creator, Joe Brumm. “I’m incredibly proud and honored to be a part of something as special as Bluey," Bush told BBC. "This album is for fans young and old and I hope they enjoy listening to it as much as I loved creating it.”

If the coming album isn't enough Bluey content for you, BBC Studios is releasing Bluey DVDs in the U.S. for the first time later this month. The release will be staggered, with Bluey Season 1: The First Half, featuring episodes 1-26, coming to DVD on Jan. 26. Bluey: Season One: The Second Half , completing the series with episodes 27-52 will follow on Feb. 9. How's that for kicking 2021 off with some great news?