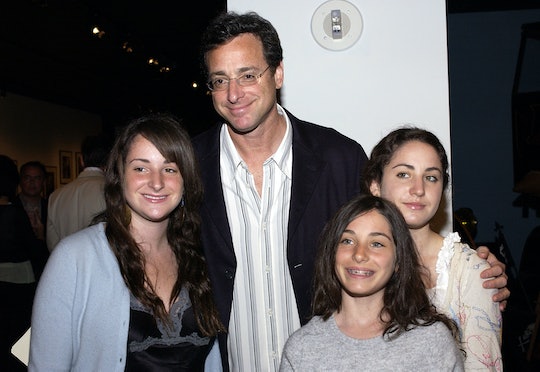 Bob Saget Was Forever Proud Of His Three Daughters

“They are empowered strong women.”

Beloved comedian and iconic TV dad Bob Saget died on Sunday, Jan. 9 at age 65. Since the news of his passing, fans, friends, and colleagues have expressed sorrow and shock on social media. As a performer, Saget was best known for his portrayal of Danny Tanner on Full House. Those who knew him, however, have nearly universally eulogized him for his thoughtful kindness and good humor. He survived by his wife and adult children.

Saget was found dead in a Florida hotel room after a show. While few details are known at this time, the Orange County Sheriff’s Office announced there were “no signs of foul play or drug use.” Mere hours before he was pronounced dead on the scene, Saget tweeted “Loved tonight’s show @PV_ConcertHall in Jacksonville. Appreciative audience. Thanks again to @RealTimWilkins for opening. I had no idea I did a 2 hr set tonight. I’m happily addicted again to this sh*t.”

Perhaps best known as playing the squeaky clean (literally and figuratively) Tanner Family patriarch on Full (and, more recently, Fuller) House, he was also well-known for being a stand-up who did not shy away from explicit, decidedly un-squeaky clean, not family-friendly comedy. While many saw this as a contradiction, Saget did not, and indeed identified with Danny Tanner as a single father himself. “People think, ‘Oh, he’s not like the Full House character; he’s this R-rated stand-up comedian,’” he recalled in a 2021 interview. “And I don’t know why people don’t realize there can be all kinds of things to a human being.

In a statement released on the evening of Jan. 9, his wife and children confirmed his death and expressing their heartbreak and fond remembrances of Saget’s career. “We are devastated to confirm that our beloved Bob passed away today,” it reads. “He was everything to us and we want you to know how much he loved his fans, performing live and bringing people from all walks of life together with laughter.”

But who are the members of the performers family?

Bob Saget had three daughters from his first marriage

Aubrey was born in 1987, just months before the first episode of Full House aired and is an artist based in New York.

Lara, born 1989, is also an artist and co-founder Studio200NYC. This past year, she has had exhibitions in New York, Kosovo, and Venice.

Jennifer, the youngest of the three, has led a more private life than her older sisters. She was born in 1992.

Saget was married to the girls’ mother, screenwriter and lawyer Sherri Kramer, from 1982 to 1997. In an interview, he described his divorce from Kramer as “difficult and painful” but shared that he and Kramer succeeded in amicably co-parenting their daughters together. “I’d be at synagogue and people would ask ‘Do you see your daughters?’ and I’d get offended. ‘Yes. I’m their father,’” he said of that period. “Their mom and I really worked out a wonderful way to do that. Yeah, [divorce] affects kids lives, but so does having parents who stay together fighting all day long, or lying to each other.”

In an interview on the Religion of Human Nature podcast with Rabbi Jeremy Fine, Saget described his relationship with his daughters as “incredibly healthy” and credited constant communication, honesty, and a willingness to admit when he was wrong. He also said he and his girls had been to therapy to discuss difficult moments, and “never stop” working on themselves.

“My daughters couldn’t make me more proud,” he said. “The only reason I think I could be a good parent is because of how remarkable my daughters are ... they are empowered strong women.”

Rizzo, a food writer with her own digital series Eat, Travel Rock TV, shared the story of how she and Saget began dating in a TikTok video posted in February 2021. “I think Bob was looking for a good Midwestern gal – a Chicago gal – like myself,” she said. Mutual friends connected them (you could say he slid into her DMs, but we’re not sure if it’s considered “sliding” if you’re announced) and, though Rizzo wasn’t initially sure, he made her a first date offer she couldn’t refuse: burgers and lobsters after one of his shows. “And then I was like ‘OK we can be friends.’ And then I was like ‘Oh no, I kind of like him.’ And then we got married. And now it’s been five years. And yes, our house is very clean.”

Saget would occasionally appear in Rizzo’s social media posts on Instagram and TikTok. In October, she posted an montage of the pair in honor of their anniversary.

Hours after his death, Aubrey posted a screen shot of a text message from her dad to her Instagram stories reading “Thank u. Love u. Showtime!”

In the family’s statement to the press, even as they ask for privacy, they acknowledge their husband and father’s legacy of laughter and positivity and encourage the public to “to join us in remembering the love and laughter that Bob brought to the world.”