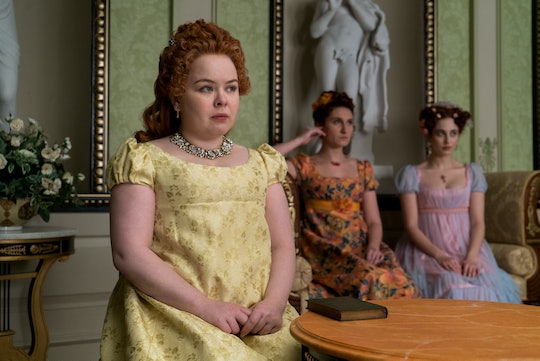 It’s official! #Polin is finally getting the attention they deserve.

Shondaland is giving the people what they want: Penelope Featherington and Colin Bridgerton’s love story! Each season of the Netflix original series Bridgerton, based on the books by Julia Quinn, follows a different member of the family — with Season 1 focusing on Daphne Bridgerton (Phoebe Dynevor) and Simon Basset (Regé-Page Jean), and Season 2 featuring Anthony Bridgerton (Jonathon Bailey) and Kate Sharma (Simone Ashley). Season 3 will tell the highly anticipated story of Penelope and Colin, played by Nicola Coughlan and Luke Newton, as their relationship takes a romantic turn. Keep reading for all the tea about this new season!

Bridgerton Season 3 will be all about Penelope and Colin.

Breaking from book order (book #3 focuses on Benedict Bridgerton’s story), Season 3 of the series will focus on Penelope and Colin.

“Like Lady Whistledown, I have been keeping a secret for quite some time and I can confirm to you all that season three is Colin and Penelope’s love story,” Coughlan said at the Netflix For Your Consideration panel event on May 15, per The Hollywood Reporter. “I have kept that secret since two weeks into season two. This is the first time I am saying it here.”

Netflix tweeted a special message from Lady Whistledown’s Society Papers today, writing “Season 3 will reveal how (or if…) Penelope and Colin go from friends to lovers!” The show’s production company, Shondaland, also tweeted the letter, along with two stylized portraits of Penelope and Colin.

“Dearest Readers,” wrote the letter from Lady Whistledown. “It is only fair that in this author’s third year chronicling the marriage mart, Mayfair’s social season should find its focus on a third son…as well as a third daughter.”

It continued, “This author can confirm that the upcoming season shall follow nione other than the budding relationship between Mr. Colin Bridgerton and one Miss Penelope Featherington. With Penelope’s days as a wallflower wearing thin, will she finally take bloom? Time will tell, and as always, so will this author.”

Executive producer Shonda Rhimes and Coughlan confirmed to PopBuzz earlier this year that Bridgerton Season 3 will begin filming this summer.

Rhimes hinted that they are working hard to bring Season 3 to viewers soon. “We're already working on season 3,” Rhimes told PopBuzz. “So we can have a shorter time between seasons.”

Season 1 of Bridgerton premiered on Netflix December 2020, with Season 2 coming in March 2022, due to delays from the pandemic. Hopefully this earlier schedule means Season 3 will premiere sometime in between December 2022 and March 2023!

It should address that heartbreaking Season 2 moment.

Spoiler alert! At the end of Season 2, Penelope was heartbroken to hear Colin tell his friends that he would never court Penelope. Luckily, Season 3 should address this.

Newton told The Hollywood Reporter in April 2022 about Colin, “He was on cloud nine from feeling like the hero. He’s obviously been celebrating, he’s had a few drinks with the lads and kind of just got carried away. But I don’t think he means any of it in a malicious way. He’s just like being one of the lads, and I think he would be devastated to know that she ever heard what he’d said.”

“I'm hoping that he has sort of a more sensitive side to him,” Newton told Netflix Tudum. “I love that we are exploring a relationship that so many people have had, where you form a friendship and you get to know each other down to the core. Then it sparks something from there.”

Fans are going to love it!

“I feel like if you see Penelope fawning over this boy for another season, you’ll be like, ‘Get it together! Come on, move on and get over it,’” Coughlan told Netflix Tudum before the FYC event May 15.

She also revealed that Season 3 showrunner Jess Brownell told her the news over the phone last year. “Jess has talked to Luke and I through the season, and I think people are going to be really obsessed,” Coughlan told Netflix Tudum. “I think book fans are going to be happy.”

Newton told Netflix Tudum, “I love Polin,” a few days before the announcement. “There’s so much love for that relationship, which brings its pressures because there are people that are really excited about this story to come to the forefront. But also it really warms me.”

While you’re waiting for Season 3 to premiere, you can re-watch Bridgerton Seasons 1 and 2 on Netflix.