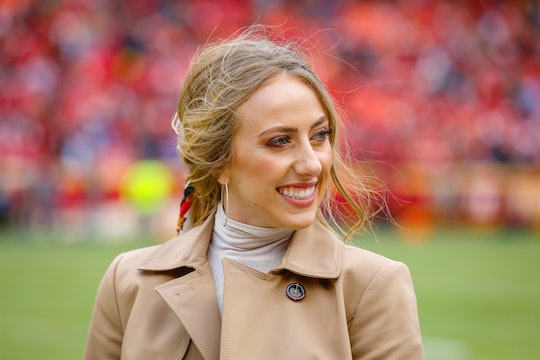 Patrick Mahomes' fiancée made a strategic shoe change at the Super Bowl.

If there's ever a time for maternity athleisure wear, it's the biggest sporting event of the year. For example, Patrick Mahomes' fiancée Brittany Matthews' Super Bowl outfit included a must for every expectant mother — comfortable shoes. Matthews showed up and showed out for her husband-to-be's performance at Super Bowl 55, but that stunning look came with a quick wardrobe change from heels to sneakers. And I'm sure that any mom, present or future, can relate to the need to get out of those shoes.

Matthews and Mahomes announced the coming addition to their family back in September with an Instagram post of a photo of the couple holding an ultrasound photo. “Mom [and] Dad, taking a small detour to the wedding,” Matthews wrote in the post while Mahomes simply shared the post with a red heart emoji. Shortly thereafter, they announced that they were expecting a little girl. The sweet pair have been together since high school, as they began dating in the 10th grade. So, suffice it to say, Matthews knows a thing or two about what it takes to sit through the never-ending turnovers that make up a football game.

Longevity of the game aside, Matthews is likely battling the inevitable foot swelling that comes with growing a new person. Not a mom alive could blame this supportive fiancée for needing to swap her strapped stilettos for something a bit more practical.

Those adorable heels were benched while some cute, white sneakers hit the field.

While the Chiefs did not go on to bring home the Super Bowl championship, Mahomes had more than his fair share of highlights throughout the game. And, being the constant cheerleader to her man that she is, Matthews likely leapt to her feet at every single on. So, yeah, I'd say some form of flats was more than called for.

More Like This
Patrick Mahomes & Brittany Matthews Reveal They're Expecting A Baby Boy In Sweet Video
Tom Hiddleston & Zawe Ashton Are Expecting Their First Child Together
Is It Safe To Keep Using Period & Fertility Apps In A Post-Roe America?
Turns Out, You Can Dilate Pretty Far Before You Actually Go Into Labor