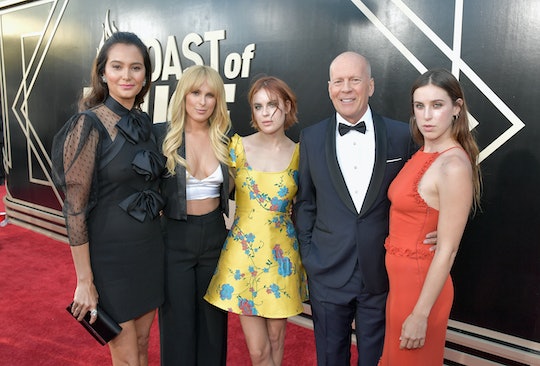 “We are moving through this as a strong family unit.”

Bruce Willis’ daughter, Rumer, announced that her father is stepping away from acting after being diagnosed with aphasia. Rumer shared the heartbreaking news in an Instagram post March 30, alongside a throwback picture of the Die Hard star looking at the camera with his signature smirk, dressed in a robe and sunglasses. The photo was accompanied by a note to fans written by his wife, Emma Heming, his ex wife, Demi Moore, and his five daughters, Rumer, 33, Scout, 30, and Tallulah, 28, whom he shares with Moore, and Mabel, 9, and Evelyn, 7, whom he shares with Heming.

“To Bruce’s amazing supporters, as a family we wanted to share that our beloved Bruce has been experiencing some health issues and has recently been diagnosed with aphasia, which is impacting his cognitive abilities,” the Willis family stated in the caption. “As a result of this and with much consideration Bruce is stepping away from the career that has meant so much to him.”

Aphasia is a disorder that “impairs the expression and understanding of language as well as reading and writing,” according to the National Institute of Deafness and Other Communication Disorders. It can occur suddenly following a stroke or head injury, or it can develop slowly due to a brain tumor or a progressive neurological disease. Bruce’s family has not stated the conditions surrounding his diagnosis at this time. Treatment often involves speech language therapy.

“This is a really challenging time for our family and we are so appreciative of your continued love, compassion and support,” the Willis family added in the statement. “We are moving through this as a strong family unit, and wanted to bring his fans in because we know how much he means to you, as you do to him.”

They finished the post with an encouraging note. “As Bruce always says, ‘Live it up’ and together we plan to do just that.”

Fans and other celebrities were quick to signal their support for the family, leaving heart emojis and offering up love and light to the family. Heming and Moore shared the same picture on their Instagram accounts, and both had recently shared photos of themselves with Bruce. Heming posted a picture of throwback photo of the couple on March 21, commemorating their 13th wedding anniversary. And Moore recently posted a picture of the two of them in honor of Bruce’s 67th birthday. “Happy birthday, Bruce!” she wrote on March 19. “Thankful for our blended family.”

Bruce is also active on Instagram, posting a photo on March 26 wearing a hoodie and sunglasses with the caption, “Compete against yourself, not against others!”

According to Page Six, Bruce has several projects completed and in post-production, including Vendetta, Fortress: Sniper’s Eye, and White Elephant. Fortress 3 is in pre-production, and it’s unclear what will happen with it at this time.

More Like This
Britney Spears & Sam Ashgari Share They Lost Their "Miracle Baby" In Statement
Meghan Markle Made A Sweet Little Tribute To Her Daughter Lilibet
Tan France Reveals The Incredible Care Package Gigi Hadid Sent For Baby Ismail
Ray Liotta Has Died At 67. Not Only Was He An Iconic Actor, He Was A Proud Dad.