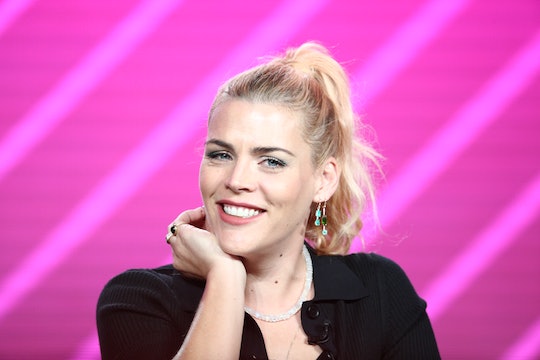 And, don't worry, she handled Elf on the Shelf this year just like the rest of us.

Last month, the weekend after Thanksgiving to be exact, Busy Philipps' daughter started to watch Freaks and Geeks without her. The actress had always hoped to watch the show with daughters Birdie, 12, and Cricket, 7. Not only is the short-lived, but critically acclaimed show a cult classic, but it launched the careers of a generation of comedic actors, including her own as emotionally complicated cool girl Kim Kelly. Still, she doesn't take it personally. “I get it,” Philipps tweeted at the time. “Because even if you start out Kim f*cking Kelly, eventually you just end up someone’s uncool mom.”

Philipps’ unpretentious sense of self and humor allows her to embrace the role. Either that or she’s been conditioned by the angsty sighs of her tween. Yet deep down, she takes some credit for her daughter’s big personality and wild spirit — and she knows Birdie recognizes it as well, especially in the past few months.

“We try to give her every opportunity to experience incredible things, and we try to really make the world available to her in that way, and I think that she has recognized that in a real way in recent times,” Philipps tells Romper.

“That being said,” she adds, with a smile audible in her voice, “when I called Louis Tomlinson Lewis … I swear to God, I thought her eyes were going to roll out of her head. She was so embarrassed.”

Nevertheless, Philipps describes her daughter as her hero, even if she can get a tad salty. Cricket, on the other hand, is a die-hard mama’s girl. “I can do no wrong as far as Cricket is concerned," she says.

But even a mortified tween would probably have to admit that Philipps' 20-year career — including multiple beloved TV series, movies, a memoir, and even her own late-night talk show — is pretty cool. Currently, she's working on a new comedy series for Peacock, Girls5Eva, produced by Tina Fey. The show follows the reunion of a one-hit-wonder girl group from the ‘90s trying to get one more shot at fame (even as the rigors and limitations of middle-age draw near). Girls5Eva will star Broadway alums Renée Elise Goldsberry (Hamilton), Sara Bareilles (Waitress), and Philipps as Summer, now a New Jersey housewife who tries to make up for her lack of talent with enthusiasm.

Her character — whom the audience often sees in flashbacks — was famous around the same time Philipps herself became a public figure during her days on Freaks and Geeks and Dawson's Creek . The nostalgia, from the fashion to the music, has not only been fun and “an incredible treat,” but it’s resulted in some funny moments on set. Like when Philipps was being fitted for a ‘90s era wig. “I was like ‘OK, yeah. But except you need to flip it out… more flippy out here, here, here,’” she says. “And, I’m not kidding you, I walked on set and I was like ‘Oh my God, wait a minute’ and I pulled up Google and I was like ‘I just asked for the haircut I had my second season on Dawson’s Creek.’ I literally just asked her to make me look like myself.”

It was Girls5Eva that prompted Philipps and her husband Marc Silverstein to recently sell their home in Los Angeles and move to New York. Relocating, of course, is always a stressful and complicated mix of emotions. Throw in a global pandemic and it’s even more so, which is why the holidays have added weight for Philipps this year.

Between shipping decorations across the country, shooting a new show, and doing a podcast, Busy Philipps Is Doing Her Best, planning an ideal Christmas hasn’t been easy, and Philipps admits to being behind. She’s particularly concerned about holiday shopping. But after partnering with Scotch-Brite, she has some ideas. “I’m sending a bedazzled toilet bowl cleaner to my sister and parents. I was thinking I could also do that for the girls,” she jokes, then laughs imagining Birdie’s reaction. “We’ll see how the next few weeks goes.”

When it comes to her annual, super-crafty Elf on the Shelf tableaus, she laughs the same tired laugh you'll hear from most moms talking about Elf on the Shelf. “I guess those elves got to show up." Since our conversation, she's posted her latest masterpiece on Instagram: two elves in face masks sit amid stickers and LOLDolls – apology gifts for showing up late. "Their excuse for not getting here earlier was that they were under a mandatory quarantine, which actually makes sense," she wrote. "And look! Even the elves know they need to wear their damn masks."

More Like This
David Beckham Impressed Mariah Carey With His Rendition Of "All I Want For Christmas"
Andy Cohen's 3-Year-Old Son Ben Has Officially Taken Over An Important Hanukkah Tradition
Meena Harris’ New Children’s Book Tells ‘The Truth About Mrs. Claus’
Netflix’s Holiday Movie Line-Up For 2022 Is Here!