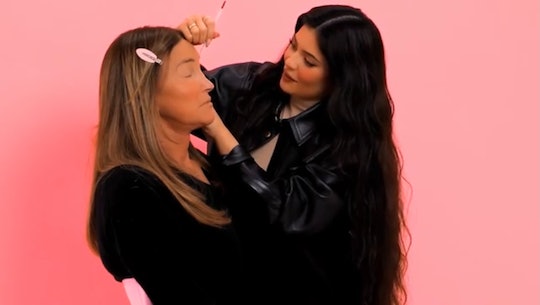 "I'll be their father until the day they die."

Caitlyn Jenner's YouTube channel features a variety of content, from "at home" segments to motivational speaking. On Sunday, a new video showed that youngest daughter Kylie did Caitlyn's makeup for the first time at the Kylie Cosmetics office in Los Angeles. It was a sweet moment between father and daughter where the two had the chance to discuss pronouns, their mutual love of makeup, and family.

"Did you ever think this day would come?" Kylie asked once she got her father in the chair. "No!" Caitlyn replied immediately. "Did you ever..." Her tone then shifted from excited and giggly to more serious and reflective. "I was 65 years old before I finally came to this," she said, referring to coming out as transgender and living publicly as a woman. "It was like I had to raise everybody else and I had such a life and finally it was my time to be me and live my life."

Caitlyn came out in 2015 during an interview with Diane Sawyer on 20/20. In her recent makeup video, she tells Kylie that her kids have been "absolutely wonderful" and supportive from the beginning, calling them her "best friends." She also says that choosing to have her children continue to refer to her as "dad" was one of the best decisions she made.

She admits that pronouns in the trans community can be a "tough subject" but that remaining "dad" is what worked for her. When people suggest that her transition has made her a mother, she corrects them. "No, I'm not [the mother]. I'm the dad. I've been the dad the whole way. I will be their father until the day they die." And while she embraces the role, she told Kylie that her children's ability to incorporate her proper pronouns seamlessly with "Dad" is still something she appreciates, years after coming out to them.

Throughout the 16 minute video, the two touch on a variety of subjects. Kylie's childhood. Caitlyn feeling unable to express herself fully until much later in life. And, of course, makeup: from Kylie turning her passion into a billion dollar empire and the first time Caitlyn had her makeup professionally done (for her iconic Vanity Fair cover) to Kylie's daughter Stormi's interest in makeup (she has none just yet, but she has inherited the "Jenner gene" for athleticism).

At one point, leaning back in her chair, Caitlyn tells her daughter "You know what is so good? ... Just to be able to wake up in the morning and just be yourself all day."

"That's why I was so supportive of you," Kylie replied. "I want you to be able to be free and be yourself. Theres just no other way anyone should live."

The full video can be seen below.

When Kylie reveals her dad's look, Caitlyn is impressed. "I love that. Not bad for 71!"