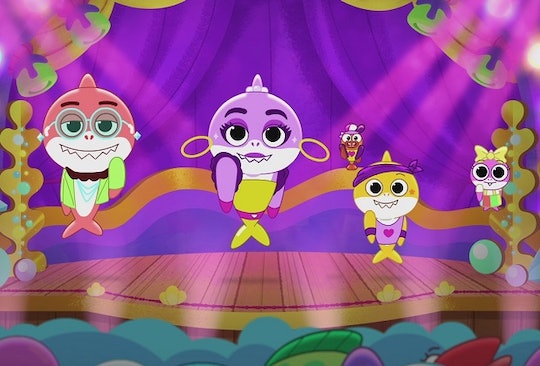 It seems that Grammy winner and multi-platinum artist, pop culture phenomenon, fashion icon, mother, and overall mogul has conquered everything there is to conquer on dry land... but can she also rule the waves? We’ll find out when Cardi B guest stars in an upcoming episode of Baby Shark’s Big Adventure on Nickelodeon. Not only will the episode feature a sharkified version of the rapper and a brand new song (“The Seaweed Sway”), it will be a family affair: Cardi B’s Baby Shark episode will feature daughter, Kulture, and husband Offset as Kulture Shark and Offshark.

The episode will premiere on April 15 at 12 p.m. (ET/PT) and follows Baby Shark and William as they meet Sharki B, the biggest star in the seven seas, who is coming to Carnivore Cove for a concert. Like her land-lubber counterpart, Sharki B is fun, flashy, and always true to herself. Offset is Sharki’s partner and biggest fan, and Kulture Shark, their daughter, is excited to join her dad to see Sharki’s concert.

After showing the star and her family around before the big show, Baby Shark and William are trying to learn Sharki’s new dance — the Seaweed Sway — but William can never quite stick the landing. Will he be able to master the moves before he has to perform with Sharki on stage at the concert?

This is the artist’s first time lending her voice to an animated character, though she’s an on-record Baby Shark fan since at least 2018, when she tweeted out the earworm lyrics. Months later, she listed “Baby Shark” as one of Kulture’s favorites. So it’s pretty cute that the 3-year-old now has a chance to be a part of Baby’s Shark’s world and, based on video of the toddler recording her lines, she’s pretty pumped!

The iconic song, Baby Shark, launched on YouTube by the Pinkfong Company in November 2015, instantly burrowing deep into our brains where it’s lived ever since. It was first video ever to hit 10 billion views on YouTube, and we’re sure many parents feel their child alone is probably responsible for about a billion of those views on their own. Since then the franchise has branched into toys and other merchandise, a live show and, of course, Baby Shark’s Big Show on Nickelodeon.