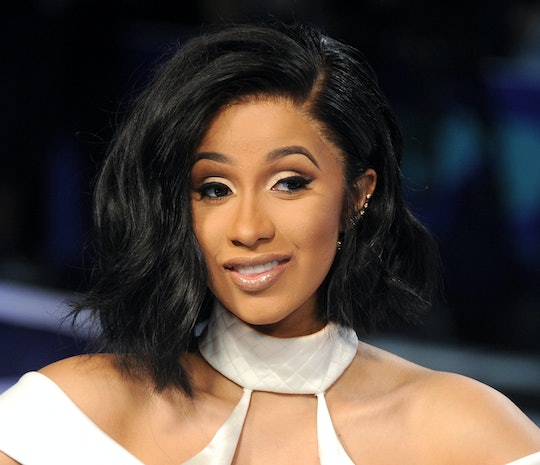 Of course, she handled it like the boss she is.

Cardi B may be a rap god, but she's also a mom, which means she has lots of the same stereotypical mom moments as the rest of us. Take, for instance, what happened in a recent video posted by RapTV on Twitter, where Cardi B stops her daughter Kulture from hearing "WAP". But because this is the Internet, no cute, funny parenting moment can pass without someone having an opinion that they just have to express.

The quick video opens with the rapper grooving to her own hit when her 2-year-old daughter, Kulture, toddles in. When she realizes the little one is in the room, she immediately turns the raunchy song off. "No no no no no no no!" she says calmly before taking a sip of wine. It's a funny and super relatable — whomst among us has not frantically reached for the dial upon hearing the first few notes of their favorite not-family-friendly song when their kids are in the car? No one needs to have that talk in a Subaru Outback, people. The added humor of the song being her own is just *chef's kiss*.

"So ya daughter cant listen to it but everybody else’s daughter can?" asks Twitter user @mo_fierce, who then made the bold move/grave error of tagging the rapper. "@iamcardib AW OKAY! Exactly what I been saying you have an agenda to push with that trash a** label your with. DISGUSTING."

For anyone who is new around here: Cardi B is Twitter royalty. She is known for delivering wit and taking no sh*t. You're a fool to come for her, and she does not suffer fools.

"Ya needs to stop with this already!" she replied in a quote tweet. "I’m not jojosiwa! I don’t make music for kids I make music for adults. Parents are responsible on what their children listen too or see. I’m a very sexual person but not around my child just like every other parent should be."

YES! So many good points here. Look, it's not like Cardi B is out forcing anyone's kid's to listen to her music. Yes, it's hard to constantly monitor what your kids are hearing and seeing in a media saturated society and more screens than we could have dreamed of when we were kids. That said, it's still on us. Cardi B is making decisions for her kid, and it's up to us to do the same for ours.

Fans were quick to agree, pointing out that celebrities are not responsible for raising other people's children and that many of our parents were also listening to explicit music just "not around us." More still pointed out that this kind of criticism is usually reserved exclusively for female musicians.

Cardi B's response also raises another issue: the false dichotomy of a woman being either overtly sexual or a mom. She is unapologetically both, and stresses that keeping them separate isn't hypocrisy — it's simply knowing that there's a time and place for different facets of your personality. In a follow-up tweet, she points out that this is a reality for lots of mothers. "There’s moms who are strippers," she continued. "Pop pussy, twerk all night for entertainment does that mean they do it around their kids? No! Stop makin this a debate. It's pretty much common sense."