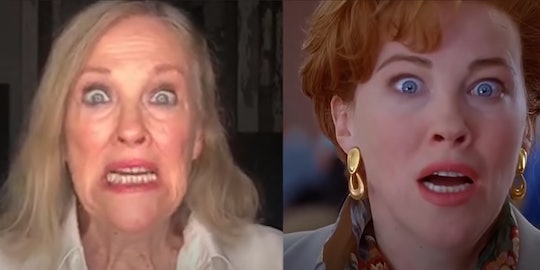 Please Enjoy Catherine O’Hara Screaming "Kevin!" Like She Did As The Mom In Home Alone

A TikTok video of the Schitt's Creek actress recreating her iconic "Kevin!" scene is going viral.

Long before her days as Moira Rose on Schitt's Creek, Catherine O'Hara played the mom in Home Alone. Two iconic mom roles from two different decades. And thankfully, since we all love a good dose of nostalgia here and there, O'Hara recreated her famous "Kevin!" scene from the beloved '90s holiday flick and even included the dramatic faint.

Some time after fans of Schitt's Creek connected the dots between to the characters, O'Hara, who won an Emmy earlier this year for her role as Moira Rose, recently revisited her role as as Kate McCallister in the Home Alone films.

In a now-viral TikTok, which has accumulated more than 448,000 likes, O'Hara yells "Kevin!" at the top of her lungs, just like she did in Home Alone 2: Lost In New York when she realizes she forgot her son, Kevin McCallister, at home — again. O'Hara's character, of course, did the same exact scream while on an airplane in the first film, which is now nearly 30 years old. (Fun fact: O'Hara was also the voice behind the character, Sally, in another iconic holiday film, The Nightmare Before Christmas.)

While this video of O'Hara has gained a lot of attention on TikTok in recent weeks, this clip was actually taken from actor Josh Gad's tribute to John Hughes in his Reunited Apart series, which was uploaded to YouTube this past June.

While some may just be realizing Moira was first Kevin McCallister's mom, O'Hara told InStyle in 2018 that this happens every year. Once November and December roll around, she gets recognized for her role in Home Alone. And while she doesn't really keep up with her co-stars from Home Alone these days, including her on screen son, actor Macaulay Culkin, she did share a sweet moment with him not too long ago. "I ran into Macaulay once and he said, 'Mom!' and I said 'Baby!'," she recalled to InStyle. "He looked great and was doing well and I was happy to see him."

If you, too, want to see Moira as Kate McCallister ahead of the holidays, you can stream Home Alone and Home Alone 2: Lost In New York on Disney+ right now.

More Like This
Kim Kardashian Says She's "Shaken" By Balenciaga's Ad Campaign Featuring Children
Every Night 'Home Alone' Airs On TV In 2022
Viral Reddit Post Asks If A Toddler Can Watch Cartoons Without Headphones On A Plane
"Corn Kid" Handed Out Over 40,000 Cans Of Corn At A Food Bank Ahead Of Thanksgiving