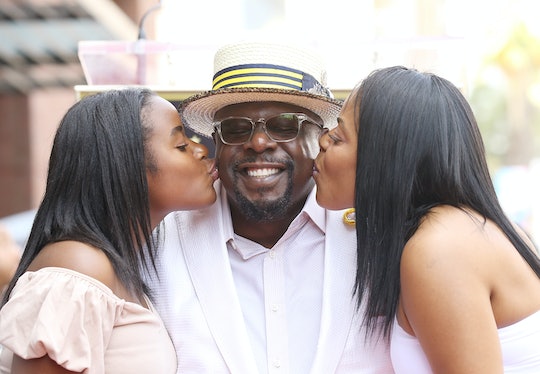 Who Are Cedric The Entertainer's Wife & Kids?

The 2021 Emmy Awards host is not only a husband and dad, he’s a grandpa too!

While Cedric has seen a wealth of success on screen — he’s starred in countless films and TV shows, including The Steve Harvey Show, Barbershop, and The Last O.G. — he has previously opened up about how financial success doesn’t instantly make you a great father. “I had to recognize that I was a very distant father to my kids,” Cedric said during a June 2020 interview on Man Enough. “I came from that generation where the man made the money. This is your way of taking care of your family and as long as you do that, that’s your job [done].”

Cedric revealed he’d come to learn there was a difference between simply being there for your kids and being engaged with them. “I kind of made up being a dad what I thought it should be. I was providing, but not necessarily caring,” he told Man Enough host Justin Baldoni. As his children grew older, Cedric said he found there was a lot he didn’t know about them. “It’s interesting to recognize that I’m not the father I thought I was,” he said. “It hurts when you realize you don’t know your children the way you believe you should.”

Beyond what Cedric has shared about fatherhood in recent years, here’s what else you need to know about his family.

Cedric The Entertainer Has Been Married Since 1999

Cedric has been married to Lorna Wells since 1999. The pair reportedly first met while Cedric was hosting BET’s ComicView in the early ‘90s. According to The Things, Wells then worked with Cedric again in 1995 when he hosted Def Comedy Jam and it was around this time that the pair began dating.

Cedric The Entertainer Is A Proud Dad Of Three

Cedric has three children, two of whom he shares with Wells and one from a previous relationship. In fact, Cedric’s oldest child, Tiara Soria Kyles, was born roughly 10 years before his marriage to Wells to a woman whose identity is not publicly known. Tiara celebrated her 32nd birthday in May, according to a post Cedric shared on his Instagram. She currently lives in Atlanta, where Parade has reported she works as a singer-songwriter and engineer.

In 2000, Cedric and Wells welcomed their first child together, a son they named Croix Kyles. Although only in his early 20s, Croix already has a few acting credits under his name, having done some voice acting for the TV movies Jingle All the Way and Jingle & Bell’s Chrismas Star.

Cedric and Wells welcomed a daughter, whom they named Lucky Rose Kyles, in 2003. The teen recently celebrated her high school graduation, an accomplishment her father, brother, and other family members serenaded her for in a heartfelt video he later shared to social media.

Cedric The Entertainer Is Also A Grandpa

According to Parade, the comedian became a proud grandfather in 2016 when his eldest daughter Tiara gave birth to Kylo Faith Kyles. At the time of Kylo’s birth, Cedric joked he was now “the GrandCeddy,” the magazine reported. In August, Cedric celebrated Kylo’s first day of kindergarten with an Instagram post cheering the young girl on. “GrandCookie is in kindergarten,” he wrote, adding “#GoKyloGo” and hand-clapping emojis.