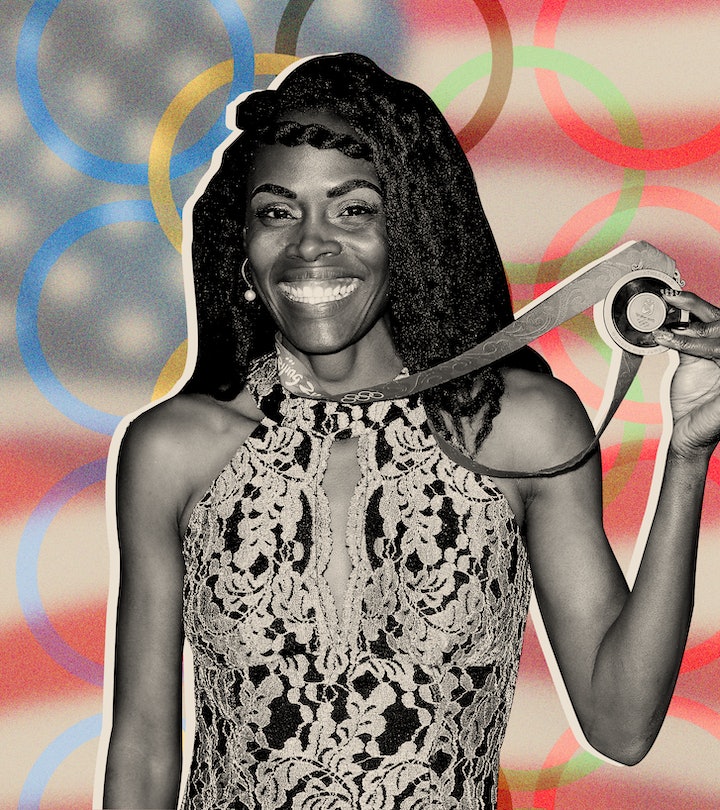 Even over Zoom, high jumper Chaunté Lowe exudes energy and warmth. Charismatic and friendly, she is easy to talk to, joking about indulging her inner “pamper queen” at home, finding shopping deals (“You need to go to Walgreens dot com!”), and not letting her kids get away with anything, because you can’t tell her a task is too hard to accomplish. You also get the sense that underneath the genuine conviviality is a woman driven to succeed.

Lowe is an American record holder for women’s high jump (indoor and outdoor), a 4-time Olympian (she took bronze in 2008), a 3-time World Championship medalist, and 12-time US National Champion. But one of her biggest challenges came in 2019, when she was diagnosed with triple-negative invasive ductal carcinoma, a very aggressive form of breast cancer. Not only was the mother of three scared about what this meant for her health and family, but the diagnosis also threatened her goal of competing in the 2020 Tokyo Olympics.

“My exact thoughts were, wow, you took my body, and now you are going to take my dreams too!” she wrote for the Susan G. Komen Foundation. “But [my doctor told me] it was okay to train and go for it, I felt happiness for the first time in weeks.”

Unfortunately, in April, Lowe and her entire family contracted COVID. Lingering effects took her out of qualifying competitions, including the the Olympic trials in Oregon at the end of June; she did not make Team USA and a fifth Olympic games. But, she told Romper, this year was always about more than winning. “Helping women make informed decisions about themselves has been my focus; that's been pushing me more than ‘I want to go to the world stage and beat everybody.’” (An important reason, she told us, that she chose partnerships with Olay and Walgreens, whom she felt were already supporting that mission.)

Romper had a chance to talk to Lowe about the importance of telling her story, raising her three children, and just how early in the morning you have to get up if you want to be an Olympian mom...

Romper: What does a typical day look like for you?

Chaunté Lowe: A typical day is not boring. I wake up every day between 3:50 and 4:30 and I go to the garage and work out. And I started doing that because when I first had kids, that's usually when they're asleep, between 4:00 and 6:00 a.m. — so to get that uninterrupted moment of being able to prioritize the things that are important to me. Then I come out from the garage into the house and I flip on all the lights and turn on music so that the kids can wake up. They all head off to school with their dad. Then I work out again. Then I clean the house, clean the kitchen. I make dinner early because I get so tired by the end of the day. I also do motivational speaking. I usually have one or two talks a day virtually. And then I get ready for homework time, swim lessons, all that stuff and then we go to bed.

CL: 7:58 somebody texted me last night before they were like, “Nevermind: you go to bed at 8. Let’s do this tomorrow."

When did you first fall in love with the high jump?

CL: As a child. I was already in love with track by age 4, but high jump came probably around 8 or 9, whenever the Kris Kross song came out. [Singing] Kriss Kross’ll make ya...

Yes! I was there!

CL: Yes, so that caused the love for high jump and then having dreams about flying and all that stuff. It just was able to put the two together and I love it.

I've just really made it a point to prioritize my health and my mental wellbeing, because if I'm not okay, I can't be there for them.

As a parent, what is your greatest challenge in continuing to compete and getting everything you need done? How is that a challenge? I hate the “work-life balance” question, but it's kind of legitimate, especially this year.

CL: This year it's been managing my children's emotional health. I think with the pandemic, not being able to see their old friends... I had to switch them to a new school so that they were all in one place, less germs. Managing fear of the different things that they see in the media. Whether it's about social justice or about the pandemic. It's been harder to leave them in this climate because it's like you're constantly putting out emotional fires. And so if I'm gone for a prolonged period of time, what is that going to look like with them, with those emotional fires?

So you’ve been doing this for a while; how has becoming a mother changed or informed how you compete, how you approach your event?

CL: Before, I was a brute, actually. I would do whatever it took to put my body on the most extreme training because I wanted to be the very best. And that hasn't changed except for, one, my perspective on what is important has changed. I've incorporated the passion of love for my kids and love for my family and love for my husband into wanting to win a medal no matter what. So I do it because I know that they're watching.

The other thing is I didn't really focus on self care as much before having kids. Now, that message in the airplane—“put your oxygen mask on first”—took on a whole new meaning after having kids. I've just really made it a point to prioritize my health and my mental wellbeing, because if I'm not okay, I can't be there for them.

Conversely, how does being an athlete inform who you are as a parent?

CL: My kids don't get away with anything. They don't get away with anything because they see me work very hard every day so their excuses have to be really, really good in order to get out of doing something. When I see them compared to other kids, I was like, "Oh wow, there's a big difference," because they know how to push through, and they have a lot of coping mechanisms that I think a lot of kids need.

It's been harder to leave them in this climate because it's like you're constantly putting out emotional fires.

If your kids wanted to follow in your footsteps, what advice would you give to them?

CL: It's hard because I want to be so competitive, but: have fun first. Because when you're doing something you're passionate about, it doesn't feel like work. It’s the same advice I give parents with sports: If the kid's out there crying and doesn't want to be there, it could be the most miserable part of their life. But if they're doing it because they love it and you're letting them lead and you're just supporting them, then it's like they could be having the best time of their life.

In 2019 you were diagnosed with breast cancer and didn’t think you’d have the opportunity to compete at all this year. But then the pandemic pushed everything back and gave you time to heal. What perspective have you gained from these unusual circumstances?

CL: I am the type of athlete that's always taking challenges head on, just going for it. But after having the chemotherapy, after having the double mastectomy, I have had to internalize more and be the best that I could possibly be. For me, this Olympic games is really about sharing my story. Not everyone is going to be an Olympic athlete, but everybody could figure out what it is that they're passionate about, what it is that they want to accomplish in life and go for it. And comparing themselves to themselves and not other people. It's so counterproductive for an Olympic athlete to say that, but that's what's really been fueling me this year. Just trying to be the very best that I can.