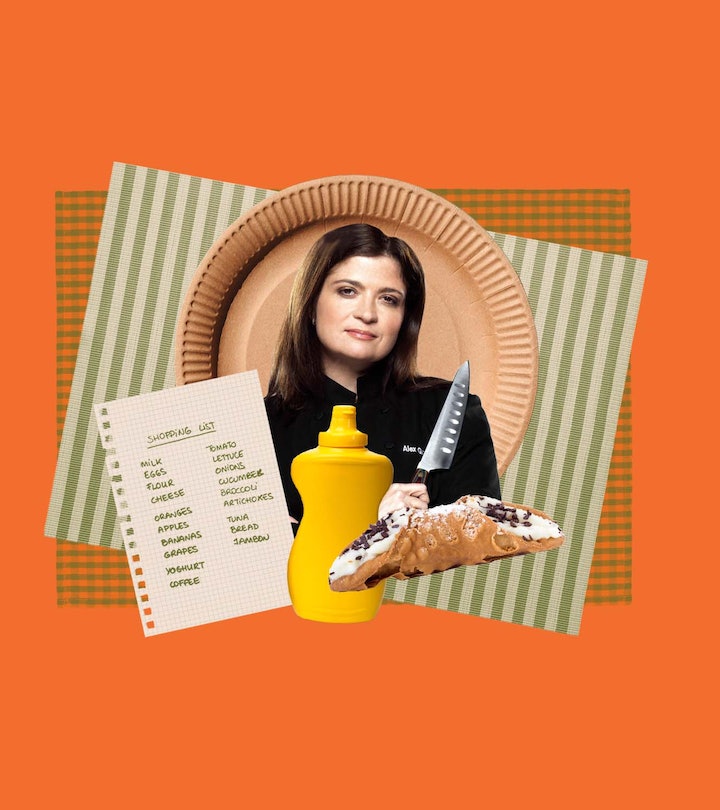 Alex Guaranschelli Is A Renowned Chef, But Her Daughter Still Gets Recipe Inspo From TikTok

The Food Network star on cooking with her teen daughter, the foods that shaped her, and her maybe concerning dependence on mustard.

Alex Guaranschelli is emphatic about the idea that you can’t force a child to cook. Even if you’re a renowned chef, a veteran of Iron Chef America, a Food Network icon, and author of three cookbooks, you can’t “make them like you.” But from the outside, it would seem that Guaranschellii herself was destined to become a chef. Her mother, Maria, was a pioneer in cookbook publishing and a devotee of Julia Child; complex French cuisine was a staple in her Italian-American household. Her father, John, could be methodical and particular in the kitchen, a stickler who instilled the skills she relies on as executive chef at Butter in New York City. So whether or not her daughter, 15-year-old Ava, follows in the family tradition, there’s certainly plenty Guaranschelli can draw from her career and childhood to pass on to her. It’s something she thinks about a lot.

“When you become a chef, you go back and you start to say, ‘What was I eating? Why am I gravitating towards this?’” she tells Romper by phone. “Every family has their quirky food traditions. As an adult, you have a choice: are you going to keep those traditions? Are you going to make new ones? Do you mix old and new together? You think about investing in the future: what do I want my daughter to know how to make that comes from my past?”

Over the course of our conversation — marked by the chef’s trademark candor and dry wit — Guaranschelli talked about the food landscape that shaped her, cooking with her own daughter, and her culinary and psychological dependence on mustard.

Obviously you come from a culinary family and that’s part of what led you to a career in food: what are some things that you've definitely wanted to pass on to your daughter?

A couple are fundamentals. One of the things I really make very clear to Ava when we're cooking is you don't want a hot dish sitting on the counter for half an hour waiting for the salad. And you think, yeah, that's obvious. It isn't. It's something you are taught. My father spent a lot of time teaching me, inadvertently by the way, those organizational skills. If we had breakfast, he was crazy about making sure the eggs and bacon were hot, the toast had to be right out of the toaster, the coffee had to be hot. I think that's where I first started to learn skills that I would use as a chef, in terms of organization and setting tasks. So my big professional chef passing of the baton is that: organize so that everything lands on the table at relatively the same time, for optimum eating.

We didn't start. And parents ask me about this all the time, but she comes in the kitchen and cooks when she feels like it. If she doesn't, she doesn't.

The other day my friend was over, we’re all in the kitchen, and she turned to them and was like, “Look, if you're not doing anything, why don't you sit down and have some tea so we can get the rest of this done?” And I was like, “Ava, are you acting like a chef? Because you're giving me chills!” “I don't know, mom, I'll get back to you.” She sounds like a chef to me.

So I found in leaving her alone, she'll come to me and say, “I want to make this milk bread.” She got all obsessed with milk bread and I said, “What is this from? I never make this.” And she's like, “Obviously TikTok, mom.” That’s another thing: the way kids procure information about food is so different

The last time I went to the supermarket, my daughter’s like, “How much mustard do you need to feel okay?”

A lot of people are intimidated by cooking and kitchens. What is your advice for people who want to try cooking, or at least not be scared of it?

Pick an ingredient and let that ground you as you explore then go from there. Eggs for example. You can cook eggs 70 different ways: fried, steamed, poached, coddled, country scramble. I mean, forget it, we'll be here all day. Then you can get into quiches and custards and ice creams. And then you can get into cakes and puddings and whatever else. When people are just hugging the shoreline with something universal that they've been eating their whole lives, it just doesn't feel that daunting. Start simply and be kind to yourself. There's no cooking police coming to shake you down.

I’m always curious to hear from chefs whether you like cooking at home or not: in my experience it’s a broad spectrum.

I mean, I'm a Gemini, as if being a chef didn't make me moody enough, so honestly it depends. It depends on how much sleep I've gotten, how much cooking I've done. Because some weeks I cook 14 hours a day for seven days in a row. And then the next week, I don't even want to make eye contact with the toaster. So it's an ebb and flow. Generally, my daughter makes me want to cook even more than I already do.

What is something that you always keep in your pantry that you think you probably go through more than most people?

Mustard. It is obscene. I mean really, the amount of mustard that I've served people, I'm unpacking it in therapy, but I still don't have an answer.

It's my solution to a lot of things. It's a natural thickener, it has so much acid, it's palate coating without being really heavy. It can be grainy or smooth. Sometimes I want the pop texture of the seeds in a sauce. I’ll throw a scoop into biscuit dough. I put it everywhere. I think it just always adds.

The last time I went to the supermarket, Ava's like, “How much mustard do you need to feel okay?” But obviously everybody's checking how much mustard they have constantly. I assume all of America, right?

This is perhaps an impossible question, but when you think of a favorite meal, or favorite type of meal, what is it?

You're asking somebody so moody to pick up one thing…

The first one that comes into my head is a place like Neptune's Net on Pacific Coast Highway in Malibu. I love to go and look at the ocean and eat a giant fried seafood platter with a very cold beer. And I've done it a few times with my best friend and Ava together, just very quietly eat. I think we pretend that we're bikers or surfers and that we are living this dangerous lifestyle. That's really up there for me because, to smell the ocean while you're eating seafood.

The other is just going down to Little Italy and eating cannoli on Grand Street. That's not really a meal, that's more like a moment. But that's emotionally the equivalent of the whole meal for me. So one is very grounded in my roots and the other is really the opposite. I pretend Patrick Swayze is coming up from the beach, shooting a scene from Point Break, and then he's coming to meet me for a date.

With a fried shrimp in hand…

I mean obviously. What else would he be doing? Preferably, by the way, with a mustard sauce, just to round it out.

More Like This
Priyanka Chopra Posed On The Cover Of 'Vogue' With 1-Year-Old Daughter Malti
Lisa Marie Presley’s Daughter Posted A Beautiful Throwback Photo With Her Late Mom
Does The FDA's Plan To Limit Lead In Baby Food Go Far Enough?
Sally Field Is The Ultimate Cool Mom Who Once Tried To Set Her Son Up With An Olympian
What Parents Are Talking About — Delivered Straight To Your Inbox