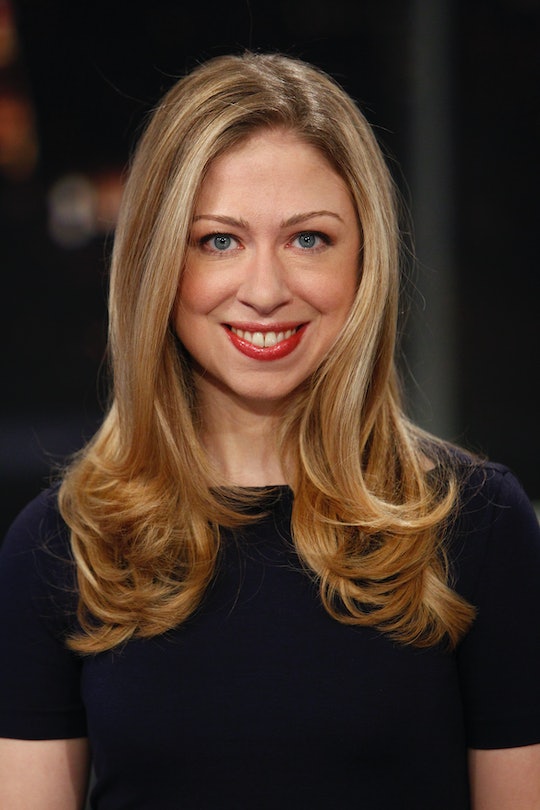 Her new book, Welcome to the Big Kids Club, was inspired by the questions her daughter Charlotte had when brothers Aiden and Jasper came home.

Chelsea Clinton is (as you probably know) an only child. Her husband, Marc Mezvinsky, on the other hand, is one of 11. Between them, they figured they’d be able to help their oldest child adjust to having a younger sibling (or two). But Clinton soon discovered that Charlotte, now 7, had a lot of questions when her brothers Jasper and Aiden came home. Some of these Clinton and Mezvinsky could answer; others came as a surprise. Clinton took notes on the whole experience, and this month she published a book designed to help kids navigate the experience of getting a new sibling. Welcome to the Big Kids Club: What Every Older Sibling Needs to Know! is a primer for young children on what a new baby can hear, see, and understand — and why they sleep and cry so much. Romper spoke to the mother of three about what it’s like to watch your first baby become a big sister.

Elizabeth Angell: What made you want to write this book?

EA: I noticed that you referred to the new baby as belonging to their siblings — not just their parents — as in "When will my baby talk to me?"

CC: I was surprised by the proprietariness that especially Charlotte felt when I was pregnant. And certainly after we brought Jasper home. I hadn’t anticipated that. She had this real sense of like, "Well, this is my baby too." When I then decided to take all these notes that I had kept from our conversations about the new baby's arrival and turn it into a book and was talking to other parents and our pediatrician and other pediatricians, I heard over and over again how often big siblings do think of the new baby, the new arrival as being theirs too.

EA: My son was two and a half when our daughter arrived and in the first few days he would constantly ask, "What's she saying?" She's obviously not talking yet — she's three days old — but that was his way of asking, "Is she communicating with me? What's going on in her mind right now?" It was so sweet.

CC: I realized at some point that Charlotte wanted to be prepared. She really wanted to know, "what do I have to know to be a good big sister?" And I was really struck by that too, of this sense that she needed to ask the questions, so that she would be ready. And we talked about how you can know the range of when the baby may walk or talk or when they'll eat certain foods, but we're going to have to see what this baby is like and what this baby's schedule is going to be. She was really determined like, "No, I need to be ready."

EA: What advice would you give someone bringing home a second or a third baby? And would you have different advice for a second and third baby?

We were very clear about what we know and what we don't know. And that your parents don't know everything, far from it — we have to ask experts to help answer your questions, and it's a great thing that we can ask for help. Don't be scared if you don't know things, just understand where to go, to trusted sources.

EA: Never too early to talk about trusted sources. As an only child, what was surprising to you about seeing your children be siblings to each other?

CC: Oh I think all of it. Because I don't have any siblings and my husband, he's one of 11. Actually for him it was quite a different experience, having two kids and then having three kids, because there were so many kids in the house when he was growing up and he is very close to his mom. He will often say that he had seven mothers because he had six older sisters, who were very involved in helping take him to places or showing up to cheer him on in his sporting events. And I think that for both of us, albeit for different reasons, having two and then having three, has been at a new experience. It all is wondrous.

EA: That’s how I felt until the bickering started.

CC: The first time there was maybe a point of tension I did find it like, Oh my gosh, wait don't you just need to love each other all the time? You're in this together. And Marc would be like, “They're fighting over a crayon or a Magna Tile or a Lego. It's normal. It’s fine.” And I'm like, "But shouldn't they always get along? He's like, "No, they need to feel their way through things and navigate and we'll intervene when we have to." But as soon as Charlotte learned to read, she wanted to read to her baby brothers and was so excited that she could now be part of their bedtime routines. All of it has been a real education for me because I didn't have that experience at all.

EA: I'm not one of those people who's like, "Everyone must have a sibling." But I think it has taught my kids a lot about co-existing with other people — and not just adults who in theory have their best interests and happiness as their primary goal. Both my kids have learned that people just get hurt feelings and say the wrong thing sometimes and there are misunderstandings.

CC: I see that so clearly with my husband and his siblings and that they have wildly different personalities and interests and yet clearly have this just deep sense of like, "Well, we're all in this together and we'll all work it out together." And I think that because they had to work it out as kids. It's a different dynamic than with even the closest of friends or cousins, where you can go take a breather and try again another day. You can't take a breather when you're all in the same room. So, it's just different.

EA: The other thing that you just said, that I hear from every parent who has more than one kid, is how wildly different they are from each other. I'm sure when you have a third that feeling is only multiplied again exponentially.

CC: That is an endless topic of fascination for my husband and me. And I imagine for anyone who is more than one kid. We've lived in the same apartment their whole lives. They play with not just similar, but the same toys and read the same books and obviously have the same parents and grandparents, and yet they're so different.

EA: A real feature of parenthood is realizing how not profound your realizations are. Humans have been doing this for a hundred thousand years or whatever, and it's still incredible every single time.

CC: My husband made that observation. He said, "I feel like I need to apologize for all of the bad jokes I made about Hallmark cards. Because becoming a parent, I understand why all the Hallmark cards are truth."

Clinton is the author of several books, including The Book of Gutsy Women: Favorite Stories of Courage and Resilience, which she cowrote with her mother, Hillary Rodham Clinton. Welcome to the Big Kids Club: What Every Older Sibling Needs to Know! is out now.