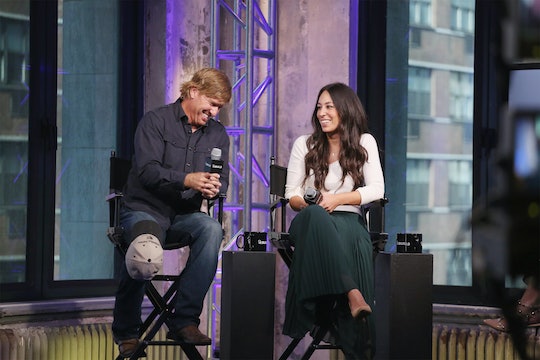 Chip & Joanna Gaines Address Accusations Of Racism & Homophobia Against Them

“It’s so far from who we really are,” Joanna said of accusations the couple is racist and against the LGBTQ+ community.

Former HGTV stars Chip and Joanna Gaines have finally addressed some of the political criticisms they’ve received over the years. While the Gaineses didn’t get specific about their political beliefs, they stressed that accusations they’re racist and anti-LGBTQ+ were far from accurate in a recent interview with The Hollywood Reporter.

“The accusations that get thrown at you, like you’re a racist or you don’t like people in the LGBTQ community, that’s the stuff that really eats my lunch,” Joanna, a 43-year-old mother of five told the publication. “It’s so far from who we really are. That’s the stuff that keeps me up.”

Joanna hinted that although the couple has made it a point to rarely respond to criticism and speculation around their personal and political beliefs, she’s wanted to on more than one occasion. “Sometimes I’m like, ‘Can I just make a statement?’” she told The Hollywood Reporter.

In 2016, the Gaineses drew criticism for never featuring a same-sex couple on their HGTV show Fixer Upper and for their connection to Antioch Community Church. According to BuzzFeed, the Gaineses regularly attended Antioch Community Church, which maintains on its website that “marriage is the uniting of one man and one woman in covenant commitment for a lifetime.” BuzzFeed also reported Jimmy Siebert, the Gaineses’ pastor, was a vocal opponent of same-sex marriage and supported conversion therapy.

In one of the few instances where the Gaineses have responded to critics, Chip maintained the couple cared about everyone in a blog post shared on the couple’s website around the 2017 New Year holiday. “Joanna and I have personal convictions,” he wrote. “One of them is this: we care about you for the simple fact that you are a person, our neighbor on planet earth. It’s not about what color your skin is, how much money you have in the bank, your political affiliation, sexual orientation, gender, nationality, or faith.”

In his post, Chip urged others to engage people who are different “with dignity and love” and stressed neither he nor Joanna were interested in criticizing others. “We are not about to get in the nasty business of throwing stones at each other, don’t ask us to cause we won’t play that way,” he wrote.

More recently, the Gaineses have come under fire after The Dallas Morning News revealed they’d made a $1,000 donation to Chip’s sister’s school board campaign just before she publicly stated her opposition to teaching critical race theory in schools.

In speaking to The Hollywood Reporter, Chip pushed back on allegations he and Joanna were not committed to being diverse and inclusive within their Magnolia brand empire. “As an American white male, it’s hard to be perfectly diverse,” he said. “In our own company, we’ve got nearly 700 employees, and one of our biggest passions is making this group represent all people.”

Additionally, Joanna, who is half Korean, told the outlet she understands all too well what discrimination feels like and thus would never attempt to make anyone else feel that way. “Growing up as half-Asian, half-Caucasian, I get what that feels like to not be accepted and to not be loved,” she said. “That's the last thing I want anyone to ever feel.”