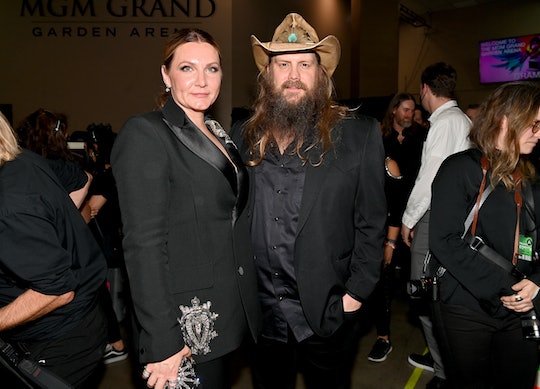 The “Starting Over” singer missed his twins’ 4th birthday to be at the Grammys on Sunday.

Known for his gloriously long hair and impressive beard, Chris Stapleton was a big winner at the 2022 Grammy Awards! The “Starting Over” singer won Best Country Album, Best Country Song for “Cold,” and Best Country Solo Performance for “You Should Probably Leave” at the 64th Grammy Awards on April 3, where he also performed. The country star’s family supported him from the sidelines at home, but his wife Morgane Stapleton, whom he married in 2007, was by his side on his big night. Here’s everything we know about his wife and their five kids.

Stapleton’s wife Morgane is a singer, too.

It turns out, Stapleton isn’t the only singer in the family. His wife, Morgane, is a singer and a songwriter, who joins her husband onstage, sings harmony on several tracks in his albums, and influences the songs he records. In an interview with Rare Country in 2017, Stapleton said, “Make no mistake, [Morgane’s hands] are always all over everything. She’s my Jiminy Cricket in a lot of ways. She’s the voice of reason, because I’m not always reasonable.”

“She’s been known to make me change keys on something,” he added. “She’ll be like, ‘Sing higher.’ I’m like, ‘Alright.’ I get lazy on keys sometimes. I’ll key it lower. That way I can sing it lower live. She won’t let me get lazy on stuff like that. She knows when I’m doing it, and nobody else does.”

Morgane is also super supportive of her husband. In a November 2021 Instagram post, she wrote, “You leave it all out there. EVERY. SINGLE. TIME. I’m so very proud of you babe! Here’s to getting to play music for as long as they’ll let us!”

They keep their kids out of the public eye.

In an interview with The Boot in 2018, Stapleton said, “I signed up for this, my children did not. I am a very private person, and in that respect, I keep my children out of it. They’re children, and they deserve the chance to be children.”

We do know that the Stapletons have five kids: a son named Waylon, a daughter named Ada, twin boys born in April 2018, and a son born in May 2019. His three youngest kids’ names have not been publicly revealed.

He’s a pro at diaper duty.

Stapleton may be a star, but he is a pro at diaper duty. When the Covid-19 pandemic first shut down the world in spring 2020, Stapleton told Country Now that his time at home was “a gift.”

“Well, you get a lot better at changing diapers,” he said. “You get out of practice sometimes, when you only get two or three days a week of it.” He added, “I get ‘em all up every morning and make ‘em breakfast and watch ‘em run around, you know? It’s a special thing to get to do. What a privilege and a gift in a year that on the surface might seem very devoid of gifts.”

In the same interview, he reflected on time with his older kids. “You get to really check in with — my older children are 11 and 10…so there’s all kinds of new personality and emotional space to explore with them,” he said. “It’s really interesting to talk to them and hear their takes on things, their likes and dislikes, and they’re very opinionated.”

Stapleton’s oldest kids are very supportive of him.

At the 57the Academy of Country Music Awards in March 2022, Waylon and Ada attended with their parents. All four wore suits and posed for pictures on the red carpet. When Stapleton won the Male Artist of the Year Award, his kids stood up from their seats to cheer on their dad, according to People.

In December 2021, Stapleton thanked his family when accepting the Male Vocalist of the Year Award at the CMAs. He said, “I want to thank my kids who have to put up with me being gone quite a bit.”

He missed his twins’ birthday to be at the Grammy Awards.

When accepting his award for Best Country Album at the Grammys on April 3, Stapleton thanked his twins for their sacrifices in his acceptance speech.

“I’m thinking a lot about sacrifices, ‘cause I missed out on some of their birthdays today,” he said, referring to his now 4-year-old twins.

Stapleton added, “Everybody in this room has made some kind of a sacrifice to be up here doing this, and I don’t know what it is for everybody, but I know that it hurts sometimes.”

“But hopefully we're all doing it so we make the world a better place, and the people that live in it will love each other and have a good time together and come together. So thank you so much for this award,” he said.

It’s so nice seeing how this family supports each other, from simple conversations at home to showing up for big events. You love to see it!

This article was originally published on April 2, 2022