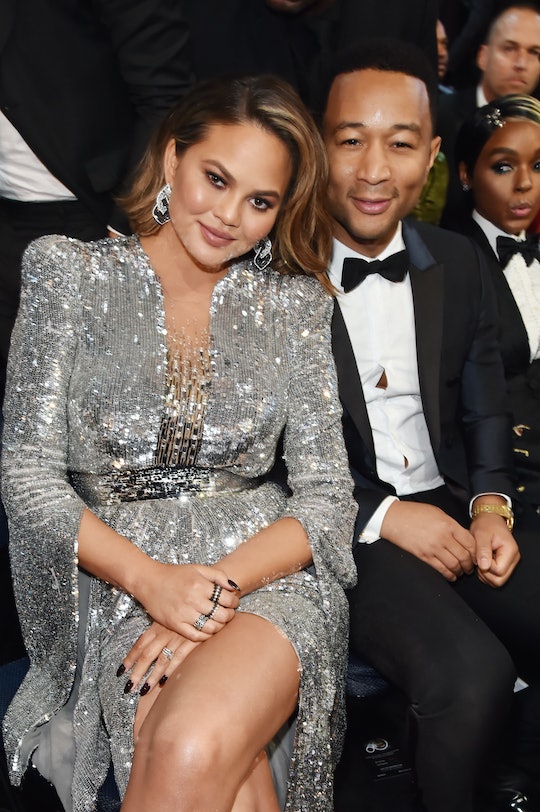 Chrissy Teigen and John Legend celebrated his win from home, wearing a towel and a bathrobe respectively.

On Sunday Night, fans got a front row seat as Chrissy Teigen and John Legend celebrated his Grammy win with a perfect blend of high fashion and loungewear. This all took place on the best approximation of a red carpet we have these days: Instagram.

Throughout the pandemic, awards ceremonies have largely skipped the traditional parade of celebrities in accordance with public health measures and social distancing guidelines. Nevertheless, glamor cannot be stopped or contained and many would-be attendees have done at-home red carpets before events, donning their finest designer apparel from the comfort of their mansions and sharing their housebound looks on social media. Alas, Teigen didn’t get the opportunity for the 2021 Grammy Awards.

It would seem that the decision to air the category for Best R&B album (rather than announce the winner at a pre-show) was made at the last minute, leaving the cookbook author and her nominee husband no time to put together a red carpet look. “What the f*ck, dude?!” she said in a video posted to her Instagram Story. “I am sitting here so bored ... and we just learned that John’s award for the Grammys is getting moved to the show. So I could have gotten all dressed up!” she huffed, jokingly indignant. “It just would have been nice to get all dressed up.”

When Legend won for his category, Teigen went Live again, this time wrapped in a bath towel with her hubby, cooking in a Versace bathrobe, behind her. “Yay!” she cheered. “John got Album of the Year!” she said before she was corrected by someone off-screen. “R&B album of the year! The more words the better!”

In her next Story, she turned the camera to her husband. “John! You just won R&B Album of the Year! How are you going to celebrate?!”

“I’m mincing garlic!” he replied, followed by cheers of “yaaay!” from the two of them. It was an adorable moment between the two, capturing such a down-to-earth, chill moment amid a huge, glamorous honor.

Shortly thereafter, Legend took to Instagram, posting an acceptance speech of sorts. “So grateful to win my 12th Grammy today, my 3rd for Best R&B Album!” he wrote. He thanked his collaborators on the album, his executive producer, Raphael Saadiq, and his team. Conspicuously missing? His wife, a detail Teigen did not miss, tweeting out a screenshot of the post.

But all’s well that ends well: eventually, Teigen was able to put together a brilliant look — a black, beaded bustier dress, statement earrings, and full-arm, sheer gloves — which she shared on Instagram.

Moreover, based on her Instagram Story from later in the evening it would appear the couple also celebrated with dinner at Spago in Beverly Hills, so she must not have been too upset.