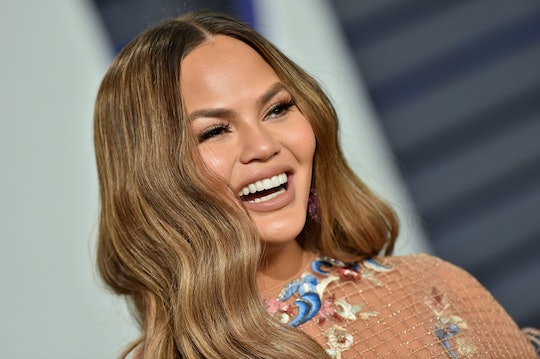 Chrissy Teigen Breaks Down Why Normalizing Formula Is So Necessary

"I dunno why this is my crusade now. I just remember the sadness I felt and want you to know you are doing it right if your baby is fed, mama."

Though 2020 has been a year of unexpected and unwelcome changes, one thing we can all still depend on is Chrissy Teigen delivering steaming hot bowls of sweet Mom Realness. In a Twitter thread, Teigen urged people to "normalize formula" feeding. "Normalize breastfeeding is such a huge, wonderful thing," she tweeted. "But I absolutely felt way more shame having to use formula because of lack of milk from depression and whatnot." The (overwhelmingly positive) responses to the tweets go to show that this is welcome, and necessary, conversation for many moms who were made to feel "less than" for choosing to formula feed their babies.

According to data from the Centers for Disease Control and Prevention (CDC), formula feeding is technically normalized – 19% of babies receive formula supplementation within the first two days of life. And while more 58% of babies are breastfed through the age of six months old, only about 25% are exclusively breastfed. In other words, the majority of American infants receive formula, either as an important supplement or primary source of nutrition. Nevertheless, the mom-shaming (and mom-guilt) persists.

One could argue this began in the early-1990s. Discouraged by the decline of breastfeeding rates through the '80s, UNICEF began the Baby-Friendly Hospital Initiative, which seeks to improve breastfeeding among new mothers. Various public health campaigns around the world, including the (in)famous "Breast Is Best" campaign promoted the message that breast milk was the perfect food for babies. And, perhaps as a result, more babies around the world were breastfed.

But even in the absence of judgmental people who take it upon themselves to shame those who formula feed their babies, the oft-repeated benefits of exclusive breastfeeding – to the exclusion of all other options – has often resulted in guilt or shame for mothers who cannot, for whatever reason, successfully breastfeed their children (or perhaps those who just prefer not to). Including Teigen.

"I remember pumping my A** OFF, highest mode, so often, because I didn't trust milk was going into their mouthes if I breastfed. it drove me mad to the point I could only get an ounce. an ounce! The stress of it, combined with the guilt that you cannot do nature's most natural thing for your own baby is too much," she tweeted.

Teigen – who has two children, Luna, 4, and Miles, 2 with husband John Legend – has been extremely open about her struggles with motherhood in the past. She has discussed infertility and IVF. In 2017, she opened up about her experience with postpartum depression in a self-penned article for Glamour. "I’m speaking up now because I want people to know it can happen to anybody and I don’t want people who have it to feel embarrassed or to feel alone," she wrote. "I also don’t want to pretend like I know everything about postpartum depression, because it can be different for everybody. But one thing I do know is that — for me — just merely being open about it helps." And in September, she shared photographs from the hospital when she lost her son, Jack, at about 20-weeks gestation, and later wrote a powerful essay detailing the experience and the grief that followed.

Discussing the realities many moms face when it comes to how to feed their babies, therefore, is solidly on-brand. Hundreds of comments on the Twitter thread, from moms, parents, and medical professionals alike, thanked Teigen for speaking up on the subject. Many expressed their own feelings of guilt and sadness about not being able to breastfeed. Others shared horror stories about doctors, nurses, friends, and family members who put pressure on them to nurse.

"I have had so many new moms in absolute emotional extremis [sic] because nursing isn’t going well, and who break down completely when I tell them that they have no reason to feel like they are doing something wrong or have failed if they use formula," pediatrician Daniel Summers replied to Teigen's tweets. "It’s such a toxic message."

"I dunno why this is my crusade now," Teigen closed. "I just remember the sadness I felt and want you to know you are doing it right if your baby is fed, mama."