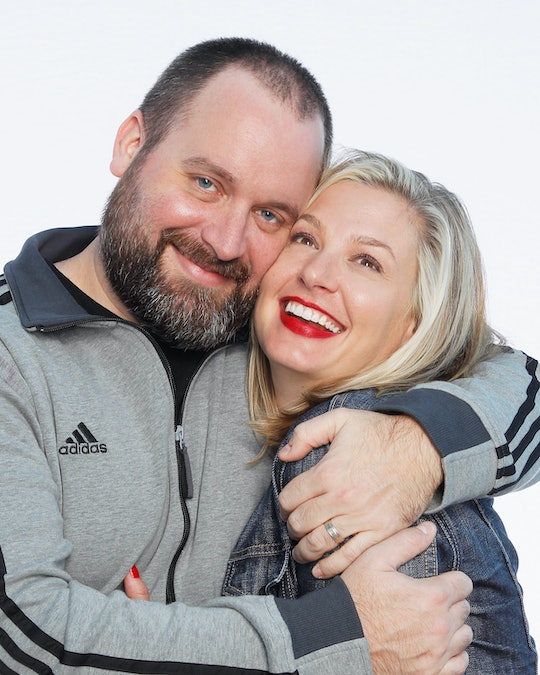 Comedy icons Christina “Christina P” Pazsitzky and Tom Segura are married and work together on the top-rated comedy podcast, Your Mom’s House. Luckily, this close bond has only seemed to make them funnier, as they continue to make audiences (and each other!) laugh with their spot-on quips about life, marriage, and parenting. The couple has two kids together, who provide endless fodder for their parents’ podcasts and stand-up routines.

Their kids, Ellis and Julian, were born two years apart.

Pazsitzky, whose third Netflix special, Mom Genes, premieres on Mother’s Day, May 8, and Segura are parents to Ellis, born in 2016, and Julian, born in 2018. They’ve often talked about their kids on their various podcasts and stand-up specials. Pazsitzky hosts Where’s My Mom’s At? comedy podcast, all about common parenting struggles, and Segura co-hosts the podcast, Two Bears, One Cave, with comedian Bert Kreischer. He also has four stand-up specials on Netflix and produces other podcasts through YMH Studios.

Despite their openness about parenting and raising kids, the couple keeps their kids from the public eye. But what they have shared about their family life is hilarious.

Motherhood is exhausting, but also “the best thing.”

“Having a baby broke me down,” Pazsitzky said in her Mother Inferior special on Netflix, referring to her firstborn, Ellis. “Emotionally, spiritually, physically. My body is dog sh*t.”

Her love for her baby outweighs the negative, though.

She added, “I am a fierce mama wolf, and I would slit all of your throats to save my kid’s life. But, sometimes, I lock myself in the bathroom and clean my ears, and I might just push that q-tip all the way in,” she laughs.

She went into labor before her planned C-section.

Pazsitzky’s welcome into motherhood was not quite what she expected — or planned for. In Mother Inferior, she detailed her birth experience with Ellis.

“So they told me, ‘Christina, you’re going to have to have a C-section’ so we scheduled it,” she said. “Because they were like, ‘The baby’s head is so big and you’re so small.’ Like ‘Your meow is so petite.’”

“What do you think happened on the day of my planned C-section? I went into labor!” she screams.

She added, “And I squeezed a human out of this tiny little fragile meow, and I had to have an episiotomy. Oh yeah, for those of you who don’t know, they had to cut my taint — the area between my balls and my butthole.”

She says motherhood made her grow up and “more well-rounded.”

In an interview with The Dad, Pazsitzky detailed some of the hard parts of parenting. “Motherhood is…suffering,” she said. “No, really. It’s a good kind of suffering. It’s constant sacrifice. There’s no other job in the world where you work 24/7, but you don’t get paid in money. You get paid in, like, a giggle… and it’s totally worth it.”

This sacrifice has made Pazsitzky feel like a better person. “And now that I have a kid and I see what most people go through and the amount of sacrifice and caring for somebody else, I think it just made me a better person,” she added. “My view of the world is more well-rounded. I think I was a child until we had a baby, you know?”

Like most parents, their kids are the ultimate excuse.

When he doesn’t want to attend an event, Segura simply says he has to take care of his kids. In the interview with The Dad, he said, “I love it when someone’s like, ‘Can you make it to this thing?’ I’ll be like, ‘nah, Christina’s out and I have to watch my son.’ They don’t even question it.”

Later, he added, “If you say, ‘Yeah, I have to take care of my kid.’ It just shuts it down. People are like, ‘Oh, yeah, of course you do. I have no response.’ I want to keep having kids just to keep those excuses coming.”

Their kids deal with bullies, too.

In his 2020 Netflix Special, Ball Hog, Segura joked that his kids make him do “crazy sh*t.” “I’m not even proud of some of the things I’ve done, all right?” he said, before launching into a story about how his son got bullied at the playground.

“I took my older son to a park. He was two and a half. The cutest little f*cking kid,” he said. “And he walks into the park, and he walks up to a playground set. And, as he walks up to it, he steps on it, and an older kid… Meaning four. He goes, ‘You can’t play with that. That’s mine.’ And I go, ‘I’ll kick your chest through your back.’ And he goes, ‘What?’ And I go, ‘I’ll stomp you out right now!’ So he’s crying. I’m laughing. Everybody’s gathered around, right? You can’t do that.”

At least their kids know mom and dad will always be there for them!

Motherhood is an emotional roller coaster.

In a trailer for her upcoming Netflix special, Mom Genes, Pazsitzky details how motherhood fills you with emotions and “crazy thoughts.”

“Nobody tells you this, but being a mom — it’s an emotional roller coaster,” she said. “Like I go from joy, to rage, to exhaustion, to exhilaration, every six seconds, every day. And just when I’m ready to throw that baby in the river…he smiles at me. Oh. Yeah. Yeah, they smile at you with those little jack ‘o lantern teeth. And you’re filled with so much joy you have crazy thoughts. You’re like, ‘Ah, I want 10 more! C’mon Tommy, we’re f*cking tonight!’”

Can you imagine the years of comedic material 10 more kids would provide? It’s a total win-win!