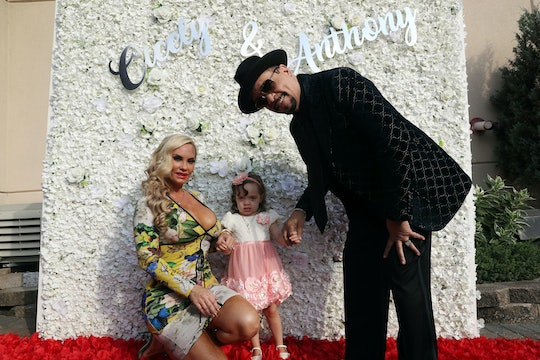 “If she doesn’t want it, all right, that’s where you stop it. But I’m not just going to say no.”

Coco Austin isn’t interested in how others think she should parent. Austin, who welcomed a daughter with rapper and actor Ice-T in 2015, recently defended her decision to continue breastfeeding well beyond her daughter’s second birthday, telling Us Weekly it had not only bonded her and daughter Chanel, but was also still a much-loved part of Chanel’s nighttime routine.

“Chanel still likes my boob,” Austin recently revealed to Us Weekly. “She’s 5 years old. It’s a big bonding moment for a mother and your child.”

On social media, however, Austin’s decision to continue breastfeeding has proved to be rather controversial. The model and actress told Us Weekly she’s gotten into numerous arguments on Instagram over it.

“A lot of people are like, 'Oh, you're not getting the nutrition after 2 years old. Why do it?’” Austin told the magazine. “And I'm like, My child's eating steak and hamburgers. She just likes a little snack every now and then and more of the bonding between the mother. Why take that away from her?”

While Austin may be getting pushback about her decision to continue breastfeeding from fellow parents (and let’s face it, non-parents) on social media, neither the American College of Obstetricians and Gynecologists (ACOG) nor the World Health Organization (WHO) explicitly tell parents to stop breastfeeding at 2 years. In fact, breastfeeding recommendations from ACOG note that parents “can keep breastfeeding after the baby’s first birthday for as long as you and your baby would like.” Meanwhile, the WHO has encouraged “continuing to breastfeed for up to 2 years and beyond” following the introduction of safe complementary foods at 6 months.

But of course, Austin noted she isn’t taking her breast out to feed with the same regularity that she did when Chanel was a newborn. Rather, she said Chanel’s desire to continue breastfeeding was more about comfort and soothing than nutrition, explaining that Chanel cuddles her and wants to nurse just before bed. “It’s not like she’s getting a meal from it, but she’s getting her little snack and it’s soothing her to sleep,” she said.

But you don’t just have to take Austin’s word for it. After hearing her mom talking about her, Chanel crashed her mom’s interview to tell Us Weekly correspondent Joe Drake that “booboob makes me sleep.”

And for Austin, Chanel’s desire is enough. “I don’t want to deprive her of something she wants just because society says you need to stop after two,” Austin said. “If Chanel doesn’t want it, alright, then that’s where you stop it, but I’m not going to just say no.”