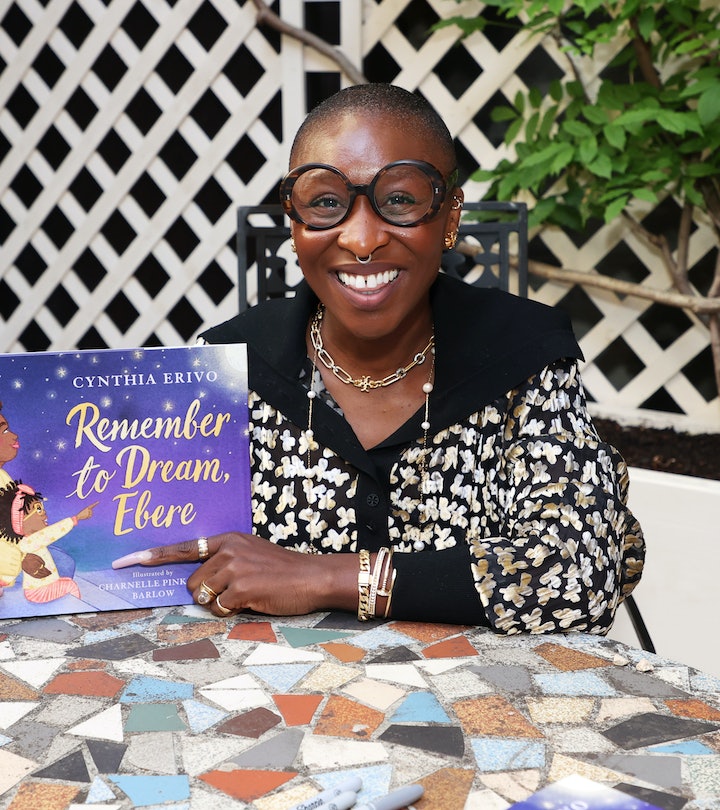 In Her New Children's Book, ‘Remember To Dream, Ebere,’ Cynthia Erivo Crafts A Mantra For Kids

The Oscar nominated (and Tony-winning) actress has written a book to inspire her youngest fans to imagine their biggest future.

Describing Cynthia Erivo’s formidable list of accomplishments makes you worry for the world’s supply of hyphens. She is an Oscar-nominated actress (for her portrayal of Harriet Tubman in 2019’s biopic Harriet) who has also anchored a TV show (last year’s riveting series The Outsider, based on Steven King novel). She won a Tony for her portrayal of Celie in The Color Purple on Broadway in 2015 and she recorded an album this year. She’s also, of course, a style and beauty icon, and is training for a marathon (yup, you read that last one right).

And now she’s the author of a children’s book.

Remember To Dream, Ebere is the story of a little girl who has trouble staying asleep. She dreams a snippet of a scene and then hops up to describe it to her loving (and eternally patient) mother, who sends her back to bed each time with instructions to dream the rest of her dream as vividly as she can. Which of course Ebere does.

When Erivo read her beautifully illustrated book recently to a group of restless, giggling children gathered at Tory Burch’s chic new Soho flagship store, she introduced herself as Cynthia and asked each small person their name. They sat rapt at her feet as she read them her book, occasionally piping up to admire Ebere’s dog, who makes an appearance on most pages.

Burch herself was there to welcome everyone and sing the praises of her friend Erivo. “I just think she’s extraordinary and I love the message of this book so much,” says Burch.

Upstairs, in a quiet room lined with beautiful sweaters, I sat down with Erivo to talk about her inspiration. My daughter Daphne, age 9, was there with me, the first time I had brought one of my children along on an interview. She was more nervous than I was, but Erivo beckoned her over and asked her to sit next to her on the couch. It turns out they had some very important things in common.

Erivo had earned another fan and admirer for life.

EA: What made you decide to write a children's book?

CE: At first, when someone asked if I wanted to write a children's book, I said, no, because I was working on so many other things and I wanted to wait until I had an idea that was fully formed and I had the time to do it properly. And then one day I was getting ready for a meeting and the idea sort of dropped into my head. I realized that a thing that I had been doing all my life was dreaming. I'd write the dreams down and fill them in with all the details, what I wanted to happen and how I want it to look. And those dreams start coming true. I wanted to share that idea with kids and with parents. It is like a mantra. You just keep teaching yourself to dream with all the details. And hopefully all those dreams come true.

EA: Oh, I love the idea of a children’s book as a mantra. I think for so many kids, books are a way for them to articulate things that are hard to say out loud. And then they read them over and over and over again.

CE: Yeah. It's the power of repetition. Being able to be confident about speaking something out loud.

EA: Can you tell me about the character's name?

CE: Ebere is my sister's middle name. My mom told me it means hope and mercy, but I just wanted to sort of pay homage to my little sister.

EA: The illustrations are so wonderful, and they add so much to the narrative. Did you talk with the illustrator a lot about what you wanted them to be?

CE: The first illustrations we tried were by a lovely illustrator, but they weren't quite right. And so I reached back out to my publisher and asked if we could find someone to really paint the pictures that I wanted. I wanted the book to feel like a gift. I wanted it to feel like a classic, one that you could keep going back to, and it would feel like art when you looked at it. Charnelle Pinkney Barlow came along and just took all the ideas that I wanted and put them on this paper.

EA: Oh my daughter and I are both Capricorns. What's your birthday?

CE: What? Oh my gosh. I'm very pleased to meet you, Daphne. I can't believe that we share an entire birthday. This is wild. And I did not know that.

EA: I didn't know that either!

CE: I'm a little bit blown away myself, so if you are feeling it, I understand, because I'm feeling that, too. That's so crazy.

EA: You were telling us about the easter eggs, like the Capricorn on every page.

CE: Yes, and I have a little dog, his name's Caleb, a real dog. And in the book, there’s a white dog that keeps popping off the pages. And Ebere is sort of like modeled on me and my sister. My sister has the dreadlocks that I have the gap, so we put it together. And my mother, she was once asked what her favorite thing about me is, and she said, "The way she wears her jewelry." But my mother is the one that taught me how to wear jewelry and enjoy it. So the mother also has like lots of jewelry on. She's got rings and necklaces. And Charnelle just got all of these characteristics and put them together and made something really, really beautiful.

EA: I wanted to ask you about the mother. So many books now are about how tired parents are — all the jokes are about how exhausted they are. But this mother never scolds Ebere. She lets her keep coming out to talk about her dream. This little girl needs to go through this process.

CE: Before she sleeps, yeah. I know that books are such a prime part of bedtime. And I wanted to write something that encouraged sleeping and dreaming, actual dreaming. I wanted this book to be part of the journey that parent and child take every night.

EA: Yeah, it’s lovely how Ebere’s mother is doing something a little different in each picture. She’s having tea and folding laundry and doing a little work, then she’s in her pajamas and reading in bed. She has her own routine. That made me smile because it felt like something for the parents, who have their own relationships with the books they read to their children every night.

CE: I didn’t just want this book to be for a parent to read to their child. I wanted it to be a shared experience. I knew that this book might live with you for a really long time and you might have to read it over and over again. So there are little things for you to keep seeing, and the dedication at the back is for both parent and child.

EA: Did you have favorite children's books growing up?

CE: Yes. I just loved The Little Prince. And there's a writer called Beatrix Potter. Jemima Puddle Duck is one of my favorite books from her series, and of course Peter Rabbit.

EA: Just one more question. Are you really training for a marathon?

EA: Is it the New York Marathon? That’s soon!

CE: I gave another month but I'm definitely in the teens right now. I didn't run today because I just flew in last night, so I was quite tired, but I might run later on today in Central Park.

EA: Have you run a marathon before?

CE: Yes. I've done far too many half marathons and I did the full New York marathon maybe two, three years ago.

EA: My gosh, congratulations. We go out and cheer for the marathon runners in Brooklyn so we’ll look for you.

CE: Thank you. Daphne, so do you have any questions?

Daphne: Well, I like it because I really like bedtime stories. I really like it when my parents read to me. I kind of want to read your book to my cousins.

Daphne: I think Maddie's seven now. And Rosie's four. And they wanted me to help them brush their teeth this summer and I was like, "I'm going to draw the line there." But I think they would like it if I read this story to them.

More Like This
Books That Are Helping Me Untangle My Own Complicated Mother-Daughter Relationship
I’m No Singer, But My Children Think I Am
Anthony Anderson Thanked His Son For Inspiring Him To Finish His College Degree
Dwyane Wade Shares Beautiful Advice For Parents Raising Transgender Children