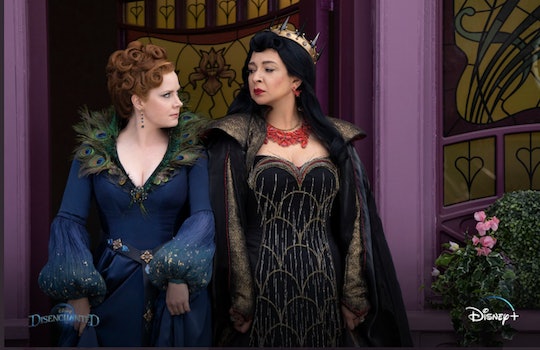 Disenchanted, starring Amy Adams and Maya Rudolph, is set to premiere this Thanksgiving!

It’s been 15 long years since Enchanted, the charming fairy tale come-to-life, starring Amy Adams, has graced movie screens. The endless waiting spell has finally been broken, and fans can finally grab their sparkliest magic wands or start awkwardly singing out loud in public because Disenchanted is coming, and the sequel even has a holiday release date.

The highly-anticipated movie follows Princess Giselle, 10 years after her storybook ending in New York City, living life as a mom out in the burbs of Monroeville. When Giselle questions her life choices and casts some back-firing spells, we’ll get to see if Happily Ever Afters can strike twice. Here’s what else we know so far:

Maya Rudolph will (most likely) play the villainess.

In probably the most exciting casting news for this fairytale follow-up, Maya Rudolph is set to play the character, Malvina Monroe. Since much about the movie is still under wraps, it’s not clear just who exactly this character is, but the movie’s synopsis reveals she oversees the community of Monroeville “who has nefarious intentions” for Princess Giselle’s family.

“When problems arise, Giselle wishes that their lives were the perfect fairy tale,” the synopsis continues. “The spell backfires, with Giselle rushing to save her family and her homeland of the kingdom of Andalasia before the clock strikes midnight.”

Indeed, by the looks of an official movie still and Rudolph’s Twitter account, it seems like the SNL alum will be playing a Disney Bad Girl. In a recent tweet of a movie still posted by Walt Disney Studios, Adams and Rudolph are dressed to the nines in their regal attire, but definitely aren’t looking too chummy as both actresses are serving dirty looks reserved only for your best nemesis.

Rudolph also got the attention of Disney fanatics last year on Twitter when she sparked rumors of her inclusion in the upcoming Enchanted sequel. “What's a good fairy tale without a great villain? I'll see you in Andalasia my pretties ...” Rudolph tweeted.

Fan faves are back along with (at least 7!) exciting new faces.

Most of the star-studded cast is back, including Patrick Dempsey and James Marsden.

Some fun new additions include Glee alum, Jayma Mays, Community’s Yvette Nicole Brown, and Oscar Nuñez of The Office fame. There’s also some even more familiar faces slated to make a surprising cameo. According to the DIS Insider, Snow White’s seven dwarfs will Heigh-Ho their way into the sequel, playing a “pivotal role” and singing their own musical number.

In an interview with People , actor James Marsden, who plays Prince Edward, spilled the beans that everyone’s favorite Wicked witch will dazzle the Disenchanted audience with her magical pipes this time around. “It was a crime that in the first film, she's in a movie musical and you have Idina Menzel, and she doesn't sing a note,” Marsden said. “We've raised the bar by giving her some big ... I can't say too much about what she sings, but original music, I'll say.”

Disenchanted will be released on Thanksgiving 2022.

The perfect cinematic treat to wash down some turkey and pumpkin pie, Disenchanted is set to premiere exclusively on Disney+ this Thanksgiving, the streaming service revealed. As soon as the clock strikes 12, and it’s officially Nov. 24, 2022, we’ll be on our sofa in our softest jammies with our stuffing leftovers, eagerly streaming the second installment of this modern fairy tale.

More Like This
Lyle, Lyle, Crocodile Is Heading To The Big Screen As A Musical Comedy
Sea Monsters, Pandas & Everything Else Coming To Netflix In July 2022 For Families
Elmo Talks About Getting His Covid Vaccine In A Cute New Video
'Caillou' Is Officially Getting A CGI Reboot Whether People Like It Or Not