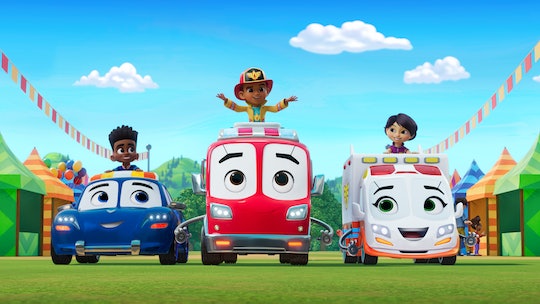 Oh, no — Dalmatian puppies are on the loose! Luckily, the Firebuds are on the case. In the debut episode of Disney’s Firebuds, which premieres Sept. 21 on Disney Channel, Disney Junior, and Disney +, a group of young first responders and their talking vehicles must search the fire station to rescue the dogs. Romper has an exclusive clip of the episode, “Car in a Tree/Dalmatian Day,” and it looks so cute! Here’s everything we know about the new animated series.

Firebuds is about a team of young first responders.

Kids will love learning about the unique role of first responders in Firebuds, which is a comedy adventure series from Emmy Award-winning creator and executive producer Craig Gerber (Disney’s Elena of Avalor and Sofia the First). Firebuds is an animated musical featuring kid first responders — there’s a firefighter, ambulance, police officer, and more — who are learning how to work together, keep their community safe, and act like a hero.

“Set in a fantastical world where talking vehicles live, work and play with the humans who drive them, Firebuds follows a boy named Bo and his fire engine best friend Flash as they team up with their first responder friends to help others in their community with problems big and small,” the series’ official logline reads. “Each episode is comprised of two 11-minute stories that showcase the importance of teamwork, helping fellow citizens and volunteerism.”

The series will have a focus on diversity too, as the creative team worked with consultants from RespectAbility to help populate the diverse communities of Gearbox Grove and Motopolis featured in the series.

Tons of stars lend their voice to the series.

Parents will enjoy hearing familiar voices in Firebuds, as it is filled with stars. These include the following:

Watch an exclusive clip of Firebuds!

Romper has an exclusive clip of Firebuds available to watch here.

Disney Publishing will also be releasing books based on the series later this year, and Spin Master, the North American toy licensee for the series, will debut an innovative toy line featuring vehicles, figures, play sets and more, launching in summer 2023.

Additionally, Bo and Flash will be featured in the upcoming Disney Junior Live On Tour: Costume Palooza, which launched on Sept. 2 and features stops at more than 80 North American cities throughout 2022.

Firebuds premieres at 10:30 a.m. PT Sept. 21 on Disney Channel and Disney Junior, and an initial batch of episodes will premiere the same day on Disney+.