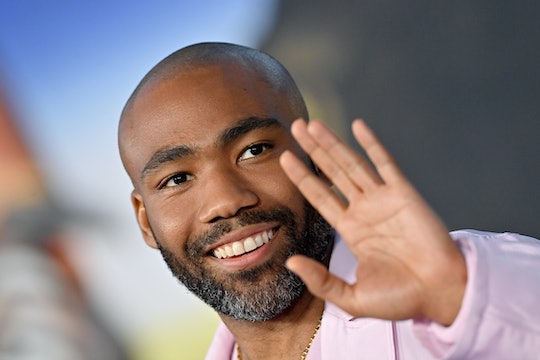 Donald Glover Is Very Private About His Family Life

But what we do know is really sweet.

Donald Glover is among the most diversely talented performers of our time. Really, his career reads like a 9-year-old who found a genie. “I want to be a famous, good-looking comedian, writer, actor... who raps and sings! I also want there to be new Star Wars movies where I get to play Lando! And... I want to be Simba.” In fact, when he hosted Saturday Night Live he even joked about being a creative polymath with a song “I Can Do Anything.” He’s also a father of three boys. While he’s understandably far more private about his personal life than his artistry, he’s what he’s shared about his family.

Michelle White is his long-time partner.

Glover and White have been a couple since at least 2015. Little is known about her — apparently she likes to keep her personal life just as private as he does his — though Glover described her to People as “very supportive.” During the 2017 Emmy Awards, when he won for both outstanding acting and directing in a comedy series, he thanked White for loving him “even with how crazy I get” and for, along with their son, “making me believe in people again and things being possible.”

It’s unclear whether the couple are married; Glover told The Hollywood Reporter in 2017 that marriage “doesn’t serve the purpose that I would want it to serve.” In most interviews and public references, Glover refers to White as his “partner” but in a 2019 red carpet interview for The Lion King he called her his wife.

Legend was born in 2016, but Glover didn’t share his name with the world until 2017 at Governors Ball, an annual concert in New York City, which he headlined. “You gave me exactly what I needed,” he told the crowd. “This song is dedicated to everybody in this crowd and my young son, Legend.” At that point, he began performing “Baby Boy,” off the album Awaken, My Love!

Glover shared with Entertainment Tonight that Legend is a big animal lover, so it’s no surprise that the original Lion King is his favorite movie. When the remake (starring Glover as the voice of Simba) came out in 2019, Glover asked Legend if he’d like to see the movie. “Yeah,” Glover reported the child as saying, “Beyoncé’s in that, right?” He then laughed. “Yeah, Daddy’s in it too!”

So for any parent whose kids think they’re boring, don’t worry: if Donald Glover can’t get his kid to recognize how awesome he is there really isn’t hope for any of us so we can all just relax and stop trying.

Glover shared that White was pregnant with Drake during his acceptance speech at the 2017 Emmys when he won for best actor. He thanked White, Legend, and “my unborn son — we’re listening to Stevie [Wonder] tonight!”

During a Television Critics Association panel shortly after Drake was born, Glover shared that having children was a lot like dealing with fame. “You’re always ready, but you’re always not ready,” he said. “It’s never really a good time. I definitely wouldn’t handle it differently. I’m happy that it happened when it happened because I don’t know if I would’ve handled it in the way that I have the context to handle it now.”

Glover shared the birth of his third child in a September 2020 GQ discussion with Michaela Coel. Donald III was named after Glover’s father who died in late 2018. Another death also affected Glover’s thoughts about the birth of his youngest child.

“I was in the hospital bed. My son had just been born, like, an hour before and I was watching the George Floyd video,” he described to Coel. “It was such a weird moment. It was such an intense, weird moment, because I’m watching that video and it’s like eight minutes long, so you’re sitting there and I had just had this amazing, joyful, expanding moment, plus my dad had passed away recently, so [my son] was named after my father... I don’t even know what, really, the word is to describe it. It was just expanding: the empathy and compassion and the terror and the joy of it.”

“Oh God, and then having the future in your hands,” Coel interjected.

“Having the future in your hands!” Glover agreed.

Glover has said he’s open to expanding his family in the future.

In the same GQ discussion, Glover shared that he hasn’t definitely put his baby-making days behind him... well, sort of.

“I’ve actually had that thing where I’m like, ‘Maybe I should just get a vasectomy and just freeze those assets,’” he said. “Because adopting kids, my family adopting kids... we actually have been talking about [it], because we have three boys so I’m like, “Oh, it might be nice to be get a girl in there.” So I think all those are great options. But it is hard.”

If the past is any indication. we’ll find out about any future kids a few months after Glover and White welcome them into their family and, just maybe, we’ll get to learn their names. (Which is fine: we love that they maintain this level of privacy — viva los boundaries!)