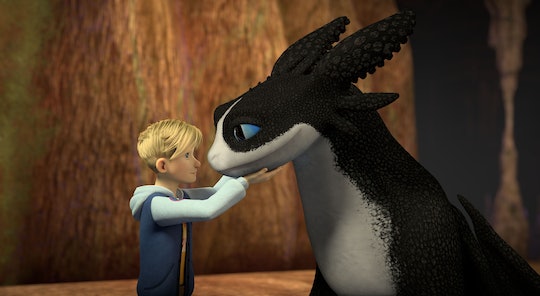 Take An Exclusive Look at Dragons: The Nine Realms Before It Premieres

This latest installment features an all new cast of characters!

If your kid wished for a dragon for the holidays, you’re in luck! On Dec. 23, the latest installment of the DreamWorks Dragon franchise (which includes the How to Train Your Dragon movies and various TV series) will premiere on Hulu and Peacock. But unlike previous adventures, which focused on Hiccup, Toothless, Astrid, and their friends, Dragons: The Nine Realms is set 1,300 years later, when dragons are now just a legend to the modern world.

When a geological anomaly opens up a miles-deep fissure in the Earth’s surface, scientists from all over the globe are confounded, and gather at a newly built research facility called Project Icarus. Some of them have even brought their kids, including Tom, Jun, D’Angelo, and Alexandra. The four become friends and soon make the project’s most astonishing discovery yet: there are dragons hidden within the fissure. Now it’s up to them to keep these mythical creatures a secret from those who would do them harm.

The series features the voice talents of Julia Stiles, Justina Machado, D’arcy Carden, and more. Fans of the original Dragon series will not only get to enjoy a whole new story arc, but Easter eggs from the trailer — like an old Viking helmet, for example — give us the feeling that the original just might have some part to play in this new story. (And may we just say that Tom’s Night Fury looks an awful lot like a certain toothless dragon we know from the Isle of Berk...)

In this exclusive clip shared with Romper, D’Angelo, Jun, and Jeremy find themselves in a sticky situation with a trio of dragons. Fortunately, D’Angelo’s still-unnamed dragon friend is on hand to help (and has a plan).

The first six episodes of Dragons: The Nine Realms will premiere on Hulu and Peacock on Dec. 23.

More Like This
A Guide To Every Dog Breed In 'Bluey'
Exclusive: CoComelon Is Going On A Live Tour Across the U.S.
Netflix Has Lots For Families To Look Forward To This August
10 Parenting Lessons We’ve Learned From 'Only Murders in the Building'