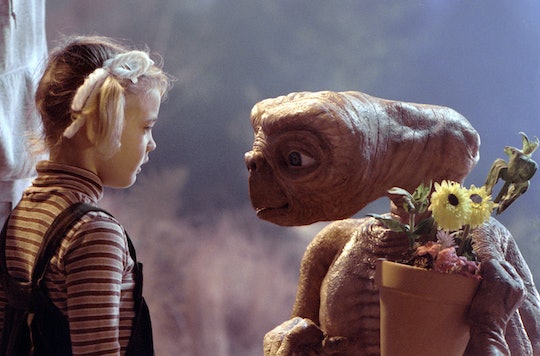 The side-by-side comparison is so cute.

Drew Barrymore had a very special surprise guest on The Drew Barrymore Show — her E.T. the Extra-Terrestrial mom, Dee Wallace. The actress, known for her roles in many horror and sci-fi films like Cujo and Critters, surprised Barrymore on set today. It’s been 40 years (!!) since E.T. premiered in 1982, so Barrymore and Wallace decided to recreate a scene from the movie and posted a cute video of it on Instagram.

The video begins with a scene from E.T. in which Barrymore plays 7-year-old Gertie and Wallace plays Gertie’s mom, Mary. In the scene, they are both looking off in the distance. From there, the picture fades to today, where Barrymore and Wallace are posing in the same position before looking at each other and smiling. “Well, this was a truly remarkable surprise,” Barrymore captioned the video with a red heart emoji.

Fans were loving this video, as one person commented, “This made me smile, then giggle, then I teared up!” Another wrote, “Well this is just beyond adorable.”

Others were lobbying for a sequel, with one person writing: “She could play your mom again! I feel a sequel coming on? It would be amazing for newer generations.”

During the interview on Barrymore’s show, Wallace revealed that she is still making movies, she is the author of a book, Born: Giving Birth to a New You, and she also has a healing practice “where I teach people about self-love,” she explained. She also shared a sweet story about the first time she met Barrymore on the set of E.T.

“I’m sitting in this really high director’s chair, and Drew comes up to me and she says, ‘Hi, I’m going to sit on your lap now,’” Wallace laughed.

Wallace continued to entertain the audience — and make Barrymore cry! — with more stories from the set. “They would put E.T. in a corner when he wasn’t working, and we found Drew, and she’s over there just talking to him,” she said. “And from that time on, Steven [Spielberg] had two guys on E.T. at all times, so that anytime you went over to talk to him, his eyes could work, and his head could go up and down and he could respond to you.”

But the most emotional part of their interview was when they talked about E.T.’s death scene. “Being the mother that I am with all the kids I work with,” Wallace explained, “you were on an adjoining sound stage, and I went over and I said, ‘OK Drew, we’re going to go shoot the scene where E.T’s dying, but you know he’s not really dying, sweetheart, he’s acting. Just like we are, OK?’ and you looked at me, and you said, ‘I know, Dee, do you think I’m stupid?’” she said as the audience cracks up laughing. “So, I picked you up, we walked into the set, you took one look at E.T. and went, ‘Ah, he’s dying, Dee, he’s dying,’” she added, while mimicking Barrymore’s cries.

Barrymore is planning on celebrating E.T.’s 40th anniversary with her two daughters, Frankie, 7, and Olive, 9, on the actual anniversary date, June 11. “I've actually been speaking with Steven Spielberg about it,” she told People on Feb. 21. “He calls my girls who he held when they were babies, and he's known them throughout their lives. I do want to revel in this moment with them and include them and celebrate with Steven. He's a big father figure to me.”

She also shared with People that she’s excited to watch the movie with them, as they are close to her age when she filmed it. “He's like, 'We're not missing this moment with your kids,'” she told the magazine. “I'm like, 'Okay. You're right. We can't. You're right.' This is very emotional and full circle.”

What a unique moment that will be! Hopefully she shares more videos of that moment when the time comes.