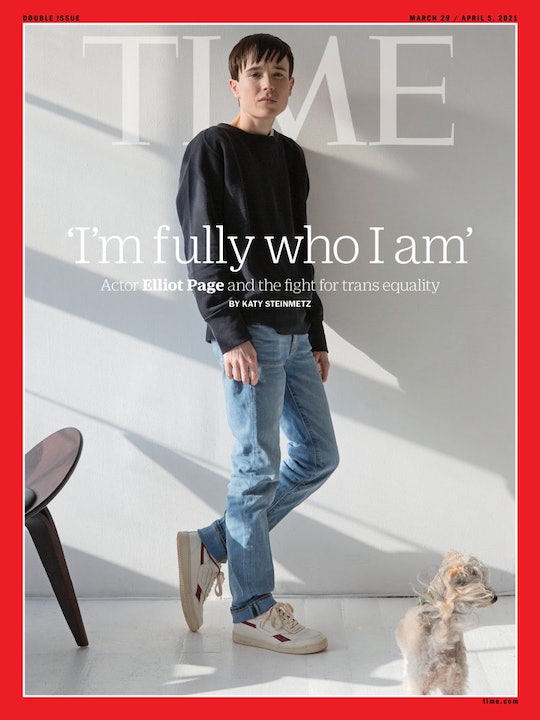 In a powerful interview with TIME, the actor talks about coming out as trans and the power of his mother's acceptance and support.

When he came out in December 2020, he became one of the most famous trans people in the world. But in Elliot Page’s TIME interview, the Umbrella Academy actor discussed the long, difficult road to living authentically, and the love and support he’s received from his mother, Martha Philpotts.

“I want to share with you that I am trans, my pronouns are he/they and my name is Elliot,” he wrote in a post on Instagram last year, expressing gratitude, joy, and fragility. This latest interview with TIME delves deeper into his experiences since coming out as well as the events that led up to it: his childhood in Nova Scotia, the compromises he felt he had to make to pursue his passion for acting that left him feeling “unwell” and unable to even recognize himself. Several times throughout the interview, he teared up or cried, admitting that discussing the subject can be emotional.

But some of these tears are good ones, like when he talked about his mother. A day before his TIME interview, Page reported that his mom said, “I’m just so proud of my son!”

“She wants me to be who I am and supports me fully,” Page told TIME.

Yet this full-support didn’t happen all at once. Page explained in the interview that his mother grew up the daughter of a minister, and, a product of her time (she was born in the 1950s), encouraged Page to act in a more feminine manner as a child because she felt that’s what was best for him. He told the magazine her evolution in regard to his gender is “a testament to how people really change.”

This kind of support, according to a robust and growing body of research, can make all the different for trans youth. Many parents fear what living as an out trans person might mean for their child. Indeed, statistics may not do much to allay those fears. The Human Rights Campaign lists a bevy of issues that disproportionately affect trans folks, including intimate partner violence, lack of health care coverage and legal protection, as well as discrimination and harassment. One study, published in the Journal of Adolescent Health showed that, when compared to their cisgender peers, trans teens were found to have an elevated risk of depression, anxiety, attempted suicide, and self-harm.

And yet more and more researchers have found that it’s not being trans that inherently causes these problems, but the way society treats trans people, and that much of the physical, mental, and emotional harm faced by trans youth can be ameliorated with acceptance.

A study published in Pediatrics, the official journal of the American Academy of Pediatrics (AAP), concluded that “socially transitioned transgender children who are supported in their gender identity have developmentally normative levels of depression and only minimal elevations in anxiety, suggesting that psychopathology is not inevitable within this group.” Indeed, the official stance of the AAP is that trans children should be supported in their gender identity by their families, communities, and caregivers.

Throughout his interview with TIME, Page admitted that his joy can be tempered with anxiety. He shared that while he’s received encouragement, acceptance, and job offers since coming out, it hasn’t all been easy. “What I was anticipating was a lot of support and love and a massive amount of hatred and transphobia,” he told TIME. “That’s essentially what happened.”

But, according to Page, the feeling of living an authentic life, as himself, has been liberating and incredible. “No matter the challenges and difficult moments of this,” he told TIME, “nothing amounts to getting to feel how I feel now.”