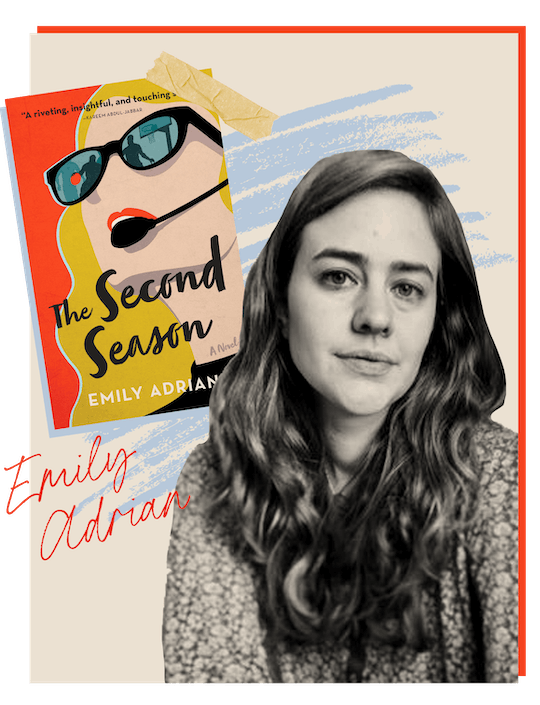 Love and Basketball: The Real-Life People Who Inspired Emily Adrian’s Book About Motherhood And The NBA

Emily Adrian’s The Second Season doesn’t shy away from the tough questions that every woman who tries to balance career and family inevitably asks herself.

My own interest in basketball was, until this spring, somewhere south of casual. On Twitter, mention of “LBJ” and his dominance on the court put me in mind not of the NBA but of Lyndon Johnson and the judicial branch. And then, sometime in April, while I was listening to a friend’s podcast about books and basketball on a long run, I heard the phrase “pick and roll” and discovered I knew what it meant. I thought I’d been tuning out the basketball half — I’d meant to be tuning out the basketball half; now I couldn’t, or rather, I didn’t want to. And so, like a stubborn crocus pushing its head through a mound of dirty sidewalk snow, my passion for the game bloomed: bright and unexpected and all at once. If you’d asked me at the time, I would have said we were a year into a pandemic and I’d run out of television. In retrospect, I was starved for joy. Basketball fed me.

No surprise then that I devoured Emily Adrian’s The Second Season, which follows a sideline reporter named Ruth Devon angling for a promotion to the announcer's booth during a dramatic finals series that pits a star player against his recently traded best friend. Mix in some complicating factors — a surprise pregnancy; a teenage daughter about to graduate from high school; a close-but-testy relationship with an ex-husband who just happens to be in the booth job Ruth wants — and the result is a compulsively readable novel that doesn’t shy away from the tough questions that every woman who tries to balance career and family inevitably asks herself.

I spoke to Adrian earlier this month about motherhood, male friendship, and the complexity of writing from a white woman’s perspective about a sport the majority of whose players are Black men.

In the novel’s first scene, Ruth’s daughter, Ariana, falls off a bench and hits her head. Later that night, after it’s clear that Ari is going to be fine, Ruth is given the opportunity to announce a college basketball game, and she takes it. Can you talk about how you decided to start the book there? Especially since most of the action takes place seventeen years later.

The very basic answer to this question is that the book is based on a real person named Doris Burke to whom this happened. So in some sense it was very easy to start there because she has framed the start of her own career that way, and her ability to tell the story of her own life is part of the reason I wanted to write about her in the first place. She’s motivated by narrative in a way that not everybody is, which is another reason she’s really good at her job; she sees the world in these little stories.

The weird thing about having a very small child is that you have to be conscious of the fact that their body, which you are caring for and nursing and hugging — that is the only body they’re ever going to have.

But the other thing is that when I was starting to write this book, my kid suffered the same injury. The weird thing about having a very small child is that you have to be conscious of the fact that their body, which you are caring for and nursing and hugging — that is the only body they’re ever going to have.

So, having watched that happen, having heard Doris talk about it happening, it felt like a good entry into a story that is largely about bodies and how we depend on them our whole lives. And then it also very neatly doubles as a story about motherhood and feeling conflicted about whether you should be there watching your son’s bruise get worse or whether you can rationally tell yourself that they’re okay and you’re allowed to go do something else.

Talk to me a little bit about Doris. How did you decide to write a novel inspired by this person’s life?

It was the [2016] playoffs and I was half-heartedly watching the game over my husband’s shoulder; the Cavs won, and Doris was interviewing LeBron. And the way she looked tucked into LeBron’s arm after an NBA finals game — I was just surprised that this middle-aged, bespectacled blond woman was onscreen at this crucial moment for NBA fans. And LeBron was just so comfortable with her, so clearly a fan of hers and so clearly disarmed by her in a way that athletes are not always by the media. And I asked [my husband] Dan, “Who is that?” And he was just like, Oh, that’s Doris. And so the combination of LeBron’s comfort with her and Dan’s familiarity with her triggered a level of fascination.

In the booth, you have no face. You are the voice, you are the authority. On the sideline, you not only have a face, it’s often a full body shot. The amount of time that you are on TV is also very limited, [as are] the places you’re allowed to go; you ask pretty innocuous questions. Whereas when you’re in the booth you’re telling the story of the game. And so for a woman to go from that very visible appearance-dependent role on the sideline — the short story is that it doesn’t happen, women don’t go from the sideline to the booth. Which is why Doris’s career is so interesting.

One of the subplots of the book is this very tender friendship between two NBA players who are initially on the same team; then one gets traded and their teams end up facing each other in the finals.

That friendship is very loosely based on a friendship between Kyle Lowry and DeMar DeRozan, [who were] the stars of the Toronto Raptors for a long time. And then DeMar got traded for Kawhi [Leonard]. I remember watching the Raptors’ first game without DeMar and Kyle Lowry, DeMar’s best friend, was not playing well. And my husband goes like, Poor Kyle, he misses his friend. And I’m like wait, what? He misses his friend? But he did! He missed his friend. I think that traditional sports fans are often in denial about what they’re watching. They think they’re watching this very simple physical battle that has a winner and a loser. But with basketball especially, we’re watching in part to see who misses their friend.

And you know, every woman I know who has ever watched sports either deliberately or over someone’s shoulder is always fascinated by the physical affection that athletes are allowed to express. They’re allowed to gently spank each other and hug really tightly and do all these things that men don’t do when they see each other at a coffee shop. But I was also interested in the flip side of that. I wanted to know if two guys who had this very tender friendship like Kyle and DeMar played against each other in the finals — which didn’t happen in real life, but it could have —which narrative would win? Would their friendship be the dominant force or would they immediately slip into this rivalry?

Partway through the novel, Ruth discovers she’s pregnant. How did you think about what it would be like to be a woman who is surrounded pretty much constantly by people who on a fundamental level do not understand what it’s like to be in her body?

The book is about the different ways that your body can fail you or intervene with your intentions, whether your intention is winning the NBA finals or getting through an interview without puking.

There is a kind of shocking violence to being a person with a uterus and to early pregnancy that is not totally out of place in this setting where you might watch a guy break his leg on live television.

There is a kind of shocking violence to being a person with a uterus and to early pregnancy that is not totally out of place in this setting where you might watch a guy break his leg on live television. I was interested in braiding those topics together because they seem at a glance to be super incongruous: a pregnant lady thinking about whether she is feeling discharge or blood on her underwear versus a guy who looks like a god worrying that he’s going to blow out his ACL.

I tried to be very careful to keep [Ruth’s] perspective as a white woman realistic, and I don’t think that she always comes across in the best light as a white woman, and that was intentional. There’s a scene where she and Lester [her ex-husband] are arguing about whether he should be taking all of the opportunities he gets, or whether he should leave some for other people — by which she means women, specifically herself. And he [asks her], Well would you do it? Would you give up what you have to these women for whom it would be even harder to achieve it? And she admits that she wouldn’t. It’s basically what Rachel Nichols said — although [Ruth is] self-aware about it. She says with a very obvious amount of shame and guilt and complexity, I would not willingly give this to someone in the name of social justice even if somebody could prove on paper that they deserve it more than me. I’m taking what I believe is mine.

You can order The Second Season on Bookshop.