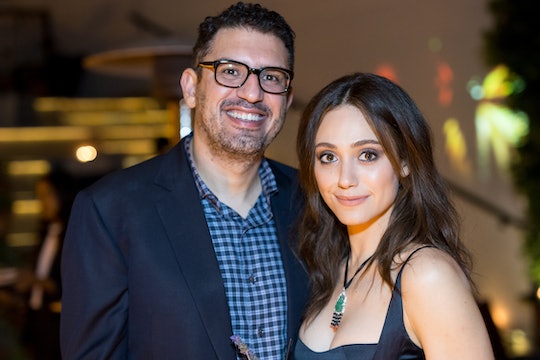 Surprise! Emmy Rossum Is A Mom To A Little Baby Girl

The actress also shared never-before-seen pregnancy photos when she revealed she’s a mom!

Shameless star Emmy Rossum dropped a major surprise over social media on Tuesday when she revealed she’d welcomed her first child with husband Sam Esmail. While the actress hasn’t shared any photos of her newborn daughter just yet, she did share a few never-before-seen photos from her pregnancy, including a sweet portrait of Esmail cradling her pregnant belly.

“5.24.21,” Rossum captioned an announcement shared across both Twitter and Instagram. “On a sunny Monday morning, at 8:13 AM, we welcomed our daughter into the world.”

On Twitter, the 34-year-old actress shared a black-and-white photograph of herself in side profile wearing a long-sleeved black bodysuit to show off her bump. Meanwhile, on Instagram, Rossum shared two other black-and-white pregnancy portraits — one in which she stands facing the camera in jeans and a white sports bra and one in which Esmail stands behind her cradling her bump. Rossum also shared what looked to be an inking of her newborn daughter’s tiny footprint on Instagram.

The actress shared one final pregnancy portrait in a separate post made to Instagram, which she captioned simply, “Two weeks before our daughter was born.” In it, Rossum can be seen cradling her pregnant belly while wearing a white robe and standing in front of a window.

Rossum married film and television producer Esmail, who also created and directed Mr. Robot, in an intimate ceremony at New York City’s Central Synagogue in 2017 following a nearly two-year engagement, according to People.

While Rossum hasn’t opened up about her experience being a new mom just yet, she’s previously gotten candid about the pain she felt growing up without a father. In an April 2017 Facebook post that has since been made private, Rossum revealed she was raised by a single mom, which always made Father’s Day a difficult holiday.

“I have a single mom,” the actress wrote, as Us Weekly reported. “This isn’t a secret. Growing up in a school — and a world — filled with mostly two-parent units was difficult for me. Father’s Day still is difficult for me. I’m not really sure how to celebrate. In the weeks leading up to it, I sense it coming like a wave approaching.”

Rossum went on to say that some years she simply tries to “ignore” the holiday completely. Other years she takes her mom out to brunch and brings her a present in an effort to show her mom how much she values her.

“She really was both a mother and a father for me,” Rossum wrote. “I don’t like her to know that it still causes me pain — 30 years later — lest she feel somehow that she wasn’t enough. She was always enough. She is enough. She wasn’t perfect, no one is, but for me she was the best mom ever.”

So it seems that Rossum has a pretty fantastic mother available to show her the ropes if need be.

More Like This
Kelly Osbourne Reveals She's Pregnant With Her First Child & Can't Wait To Be A "Mumma"
90 Day Fiancé Stars Loren & Alexei Brovarnik Announce They’re Expecting Baby #3
Rihanna & Her Baby Bump Were Transformed Into A Piece Of Art For The Met Gala
Michelle Williams Is Going To Be A Mom Of 3!