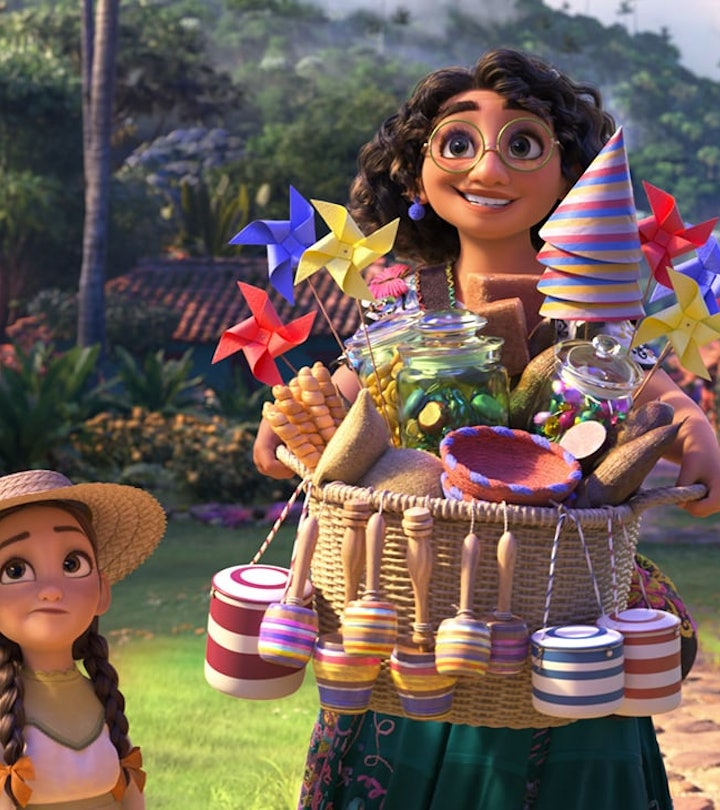 I had Belle from Beauty and the Beast. I’m so glad my daughter will have Mirabel.

I still remember the first movie I saw in the theater. It was Beauty and the Beast, and I loved it. I remember being impressed by the darkness of the room and the brightness of the film. I loved that Belle got to be pretty and smart. I remember not understanding how it didn’t win Best Picture that year at the Academy Awards (it was the first animated film ever nominated). What can I say? I was 7 years old and enamored! As a brown-haired bookworm, I identified with Belle like no character before.

The thing is, though, Belle and I are actually separated by some pretty stark differences. For one, I’m Latina. But back in 1991, brunette was what we had by way of diversity; she was the closest I was going to get. Thankfully, in the 30 years and 30 Disney animated features since, we’ve come a long way.

That’s why I was so excited to take my 5-year-old daughter to Encanto as her first in-theater experience. It’s not just that Covid had delayed this occasion or that we’re big Lin-Manuel Miranda fans (although both of those things are true), it’s that I wanted the experience to be as validating for her as it had been for me. I wanted a film that told her she matters, that the world is ready to receive her talents, that she is the heroine of her story.

I can’t overstate how powerful it is that we get to have this conversation around a heroine that sounds like our family and our community.

On all of these counts, Encanto delivers. As the film’s co-director and writer Charise Castro Smith told me, her goal really was to “help girls, like your daughter, girls like my daughter, see themselves and truly understand their own worth.” As you might know from watching the trailer on repeat with your little one (we did this approximately 1 million times before getting that first-ever bag of popcorn), Encanto does this by centering Mirabel, who is voiced by Stephanie Beatriz. She’s a teenage member of a large Colombian family blessed with magical abilities. The hang-up is that she’s the only one who doesn’t have “a gift.”

But there are ways to be special other than having magical powers, and Mirabel is exceptional all on her own. Castro Smith explained how sight is critical to Mirabel’s journey. For you Anglos out there, “mira” means “look” in Spanish, and the character sports some fabulous green glasses to further drive home the point (which is also worth noting: Can you imagine a previous Disney heroine in glasses?).

You see, the cause of the conflict in Encanto isn’t a villain with nefarious motives, a monster out to cause destruction, or even the world needing to be saved. It’s the expectations we have of our family members, the unhealed trauma that can filter down across generations.

My daughter can watch a fight sequence without being scared. A chase scene doesn’t bother her. But a kid getting in trouble? That has her squirming in her seat, covering her ears, and looking away. The pitfalls of family expectations is the kind of issue kids like her can relate to, and one we all need some help resolving. Castro Smith told me the team was “led by relationships in this movie” and put the interpersonal stuff at the forefront.

“Everyone feels pressure from their families to live up to expectations and make their families proud of them,” she explained, noting this stress is often more acute in immigrant families, and those that have struggled. “It’s wonderful to have talents and passions, but we love each other for who we are fundamentally and not what we do.” Encanto, she says, is a movie for all of us, about accepting ourselves and our family members for who they truly are, and not who everyone expects them to be or who they feel pressure to be.

Since seeing the film, my daughter and I have had several conversations about this idea, about practicing radical self-love within our family. She’s wrapping her head around it, processing it the way kids do over time. And I can’t really overstate how powerful it is that we get to have this conversation around a heroine that sounds like our family and our community.

The cause of the conflict in Encanto isn’t a villain with nefarious motives, a monster out to cause destruction. It’s the expectations we have of our family members, the unhealed trauma that can filter down across generations.

Castro Smith notes the importance of “having a young Latina protagonist, who is not perfect in the traditional, animated princess way, who is so strong, capable, compassionate, and just really formidable.” She thinks watching Mirabel will add to what she calls the imaginative landscape of children, helping them envision better, more just, and more inclusive futures for themselves and the world.

She remembers growing up Cuban American in Florida and thinking that the makers of movies and theater shows must just not know that Latinxs existed. She’s glad that it’s changing and stories like Mirabel’s are becoming more mainstream. For her, normalizing the Madrigal family as “ethnically, racially, culturally diverse and blended, which is the case in so many Latino families” is particularly exciting because of its ability to humanize those who are too often left at the margins.

Thanks to films like Encanto, my daughter is growing up seeing herself on screen from the get-go and I hope that helps her imagine a whole world of possibilities for herself. I hope it helps her skip a few steps I had to take to get to where I am now.

I’m not sure if this first-movie experience will stick in my daughter’s mind like mine did or Castro Smith’s did (her first in-theater film was The Little Mermaid and she said she fantasized about living “under the sea” for a solid year afterward). But I’m so grateful we got to make an occasion around seeing a film that sees and honors families like ours, and celebrates the potential of girls like her.

Castro Smith said that during the writing process, she kept returning to advice she got, that all she needed to do was write a film she’d want her daughter to see. She has. For her daughter, my daughter, and yours too.