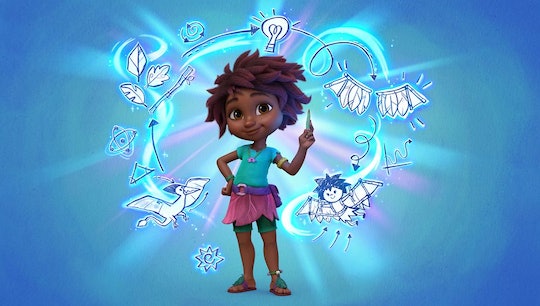 Eureka! Can Teach Your Kids a Superpower

Rocky Falls has everything you’d expect from a prehistoric town on a kid’s television show: buildings carved out of stone, friendly dinosaurs, and lots of vines doing the job of ropes. It’s also the home of Eureka, a spunky young inventor whose superpower on her titular show is one that every kid can learn.

“Thinkering,” a portmanteau of “thinking” and “tinkering,” is Eureka’s defining trait and Eureka!’s most important lesson for kids. It’s what she does when faced with a problem: think about a solution and keep tinkering with it until the problem is solved. It’s not unlike what scientists do when trying to find cures for disease and dads do when they’re trying to get the washing machine to stop making that weird noise.

The show’s celebration of creativity and scientific thinking is coupled with a matter-of-fact inclination to use “thinkering” to help others, to use problem-solving abilities for unselfish reasons.

Typical is the first episode, in which Eureka and her friends are riding their “rockin’ rollers”—single-wheeled skateboards that Eureka “thinkers” up in the opening credits—when they come across a whimpering woolly mammoth trapped under a branch. Eureka thinks up a “Woolly Pulley” using those wheels and vines, seeing the various components in her mind's eye as glowing pieces of the puzzle. The mammoth becomes Eureka’s pet after she convinces her parents and “thinkers” up a way to get him in and out of the house.

At other points in the series, and with help from her friends and family, Eureka comes up with a vehicle that helps everyone get to school on time, a machine that makes slushies from a local melon, and a new kind of flute for a new student in her class who’s also an avid flutist. She’s the kind of person—smart and good-hearted—that all parents want their kids to be.

Eureka! airs on Disney Junior, but the first six episodes are available on Disney+. Episodes 7 through 10 arrive on the service on August 24.

More Like This
3 Reasons Parents Can Be Happy 'Bluey' Is Back
10 Of Bandit’s Funniest Dad Lines From 'Bluey'
The White Lotus Is The Perfect Thrilling Treat For After The Kids Go To Bed
A New 'Golden Girls' Themed Restaurant Is Happening!