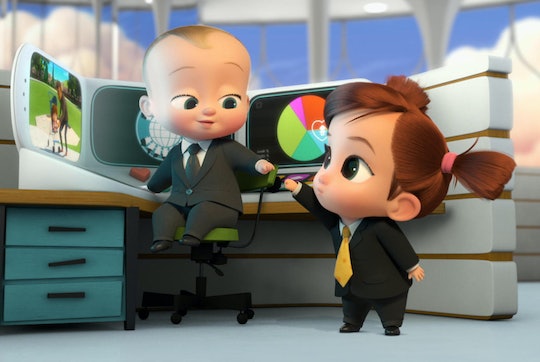 Exclusive: Get A Sneak Peek At The Brand New Boss Baby Series Coming To Netflix

There’s a new villain in town and they’re called, wait for it, the Uncuddleables.

If you’ve ever looked at your infant and thought “There is clearly way more going on in this little creature’s mind than they’re letting on” — and, really, what parent hasn’t thought that at some point — then Boss Baby probably resonates with you. The franchise has announced its new series, Boss Baby: Back in the Crib, is coming to Netflix pm May 19, and we have an exclusive first look at the trailer!

The series, the second in the franchise, will take place after the events of Boss Baby: Family Business. After being framed for embezzlement, Theodore “Ted” Templeton must dust off his Boss Baby persona and take refuge with his brother, Tim, and two nieces, the brainy Tabitha and fellow Baby Corp employee Tina. Together, Ted and Tina lead a new team to increase the world’s love of baby’s (diverting attention from unworthy creatures, like puppies and cats) while keeping a new cadre of villains — the Uncuddleables — from destroying Baby Corp forever!

The original 2017 film was an instant hit, grossing more than half a billion dollars worldwide in box office sales alone. Family Business, released in 2021, reached over 2 million households via Peacock’s streaming service in its first month.

In this trailer, we’ll see Ted’s triumphant return to Baby Corp, his burgeoning rivalry with niece Tina, and their crack team including a personal assistant, a boundary-pushing loose cannon, and... a filing cabinet?

Look, do we worry that watching this series will make small children think they can organize and rise against us? Yes. Of course we do. But we have to weigh those risks against the fact that if they’re not entertained by some TV every once in a while we’ll never get our laundry folded. Besides, they just might learn some valuable executive skills.

Boss Baby: Back in the Crib will premiere on Netflix on May 19.

More Like This
Exclusive: Mickey Mouse Funhouse Introduces Deaf Character Named Fig
Cardi B Shows Us All How To Change Diapers With Long Nails In Helpful & Hilarious Video
Nick Jonas Gave Priyanka Chopra A Tree For Mother's Day & His Reason Why Is Really Sweet
Why Gwyneth Paltrow Trolled Us All With $120 Gem Stone-Encrusted Luxury Diapers