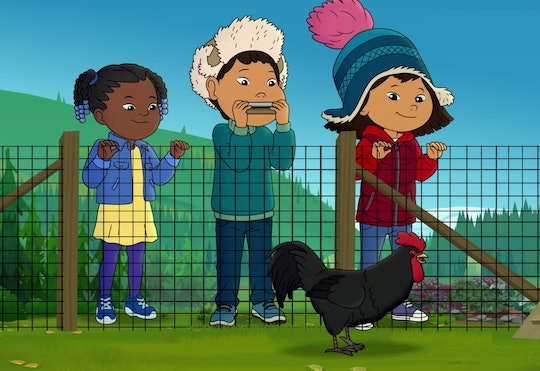 The award-winning PBS Kids series Molly of Denali will return for a second season early next month, bringing with it a host of new adventures and lessons about Alaska Native cultures. Indeed, in the season’s premiere episode, Molly learns about real-life Alaska Native civil rights leader Elizabeth Peratrovich and her role in advancing Alaska’s Anti-Discrimination Act of 1945. Take a peek at the fun that awaits children with this exclusive clip from Molly of Denali’s upcoming second season.

When Molly of Denali first began taking young explorers on educational adventures in Alaska with its series premiere in 2019, it was the first nationally distributed children’s television show to feature Native American and Alaska Native lead characters. In fact, the ground-breaking show continues to incorporate vital Alaska Native voices in all aspects of its production, including voiceover actors, animators, writers, producers, musicians, and story and language advisors.

“In Molly of Denali, we are sharing the rich wisdom of elders before us, passing along over 10,000 years of scientific, environmental, and social-emotional knowledge,” Yatibaey Evans, the series’ creative producer, tells Romper. “The series is an opportunity for Alaska Native people to tell the world about our ways of life that will help preserve our collective future.”

In 2020, the show won a Peabody Award, which are awarded to compelling and empowering stories in television, radio, and online media. The second season of the critically acclaimed children’s show promises to provide young viewers with more captivating stories rich in Alaska Native history and culture.

“This season offers more groundbreaking episodes that uplift Alaska Native values and cultures and celebrate the importance of community and the natural world,” executive producer Dorothea Gillim tells Romper. “Audiences will love all the great new content, including animated and live action shorts as well as a host of digital games.”

Take the exclusive clip PBS Kids shared with Romper from the fifth episode in Molly of Denali’s upcoming second season, for example. In it, Molly strengthens her community by aiding her friend Trini with a special project that is particularly meaningful to Trini. When Trini learns her mother will be coming home on military leave, she decides she wants to whip up some of her family’s famous omelets as a means of welcoming her mom home. Unfortunately, Trini’s chickens stop laying eggs when the temperature begins to drop. But with Molly and Tooey’s help, Trini and her dad are able to winterize their chicken coop and make sure there are plenty of fresh eggs for their omelets.

The second season of Molly of Denali, which features a one-hour special followed by 23 half-hour two-part episodes, will premiere Nov. 1 on PBS Kids. Check your local listings for air times.

More Like This
The Best Valentine’s Day TV Episodes For Kids
Exclusive: Watch How A Group Of Princesses Save The Day In Netflix's New Animated Series
We Ranked The Best (& Worst) Games Our Kids Learned From 'Bluey' — You're Welcome
10 Great Podcasts That Will Keep Your Kids Entertained On Your Next Family Road Trip
What Parents Are Talking About — Delivered Straight To Your Inbox